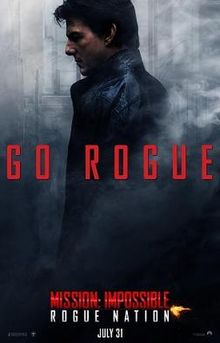 In latest news about the movie ‘Mission: Impossible Rogue Nation,’ Paramount Pictures has announced that the trailer for the movie will be screened on Imax screens.

According to a report by Deadline, around 363 large-screen venues in North America are said to be screening a five minute trailer of ‘Mission: Impossible Rogue Nation.’ The trailer will be shown in theatres that are screening the movie ‘Terminator Genisys.’

In the movie, Tom Cruise will be playing the lead as IMF agent Ethan Hunt, joined by his teammates Simon Pegg and Jeremy Renner, who also starred in the previous edition of the movie, ‘Mission: Impossible- Ghost Protocol.’

The movie revolves around the existence of the Syndicate, which is a highly secretive criminal organization that is committed to putting the IMF out of business and interfere with their efforts of protecting international security.

Talking about the movie details, Dana Goldberg, the COO of Count Skydance Productions said, “It is getting better and better with each episode. Credit to Chris McQuarrie and Tom Cruise and Don Granger who works with us, and it’s a phenomenal movie. It’s a phenomenal movie and I think I’m officially allowed to say that we tested even higher than Ghost Protocol. There’s not a lot of times in your life, you dream about them, but those moments you go to a preview screening and everybody’s there, your director, your star, the studio, you sit there and from the second the movie starts, you’re just like ‘oh, this feels really, really good,” according to Collider.

'Descendants of the Sun 2' news: Jin Goo eager to take...