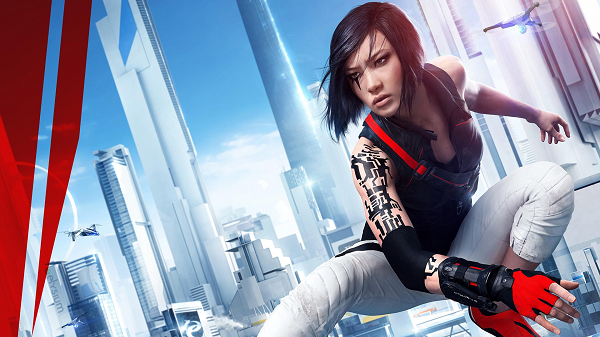 Mastering Faith’s movement and combat will be key to any gamer who wishes to explore the new title’s open-world environment. The footage from the game (below) should provide gamers an idea of how Faith moves and how she uses what’s in her arsenal against enemies.

Faith has fluid, free-running movement which she uses to traverse buildings and other locations. Similar to the original game, she runs, jumps, and generally does parkour movements in the game. However, in “Mirror’s Edge Catalyst,” Faith will have two brand- new moves. The first is called Shift and it gives her a burst of acceleration in any direction. The second move is called Quickturn. This allows her to rapidly turn 180 or 90 degrees, which will be handy when trying to evade enemies.

The video above shows Faith’s movements from a first-person perspective. This is how it will be in the game for players as well.

Faith will also have brand new gadgets to help her move in the futuristic city of Glass. These upgraded hardware includes a mag rope and disruptor. The first one allows her to “latch on to specific points in the world, allowing for unique traversal and interactions opportunities.” Meanwhile, the disruptor will help her interrupt AI systems and eventually destroying them.

Faith’s fluidity will be useful in her combat moves. By being always on move, she can build up Focus which allows her to enter Flow, “a state of awareness that allows you to attack in new and more powerful ways.” When she’s in the Flow state, Faith can do “Swift” attacks. By not maintaining movement and action, Faith will lose Focus, which makes her prone to greater damage when attacked by an enemy.

Other than these, Faith can also deliver light and heavy punches as well as use her environment when fighting. However, she won’t be able to use any guns.

As shown in the video above, gamers will be fighting enemies from a first-person view. However, when Faith completes a finishing move, the game briefly shifts to a third-person perspective.

“Mirror’s Edge Catalyst” will be released on May 24 to the PS4, Xbox One, and Windows PC.