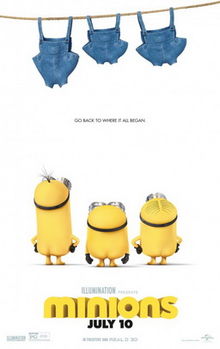 Sandra Bullock, recently attended the world premiere of her latest movie, ‘Minions’ in London, as she plays the villain in the movie.

Illumination Entertainment, recently released a trailer for the movie, which revealed that the movie revolves around the three minions, Stuart, Kevin and Bob, who go on a hitchhike to Orlando. Set in 1968, the minions will be seen trying to make it to VillainCon, the world’s biggest gathering of bad guys. The minions are seen hunting for jobs, and end up with Scarlett Overkill, a sexy villainess.

The movie is a prequel to the movies that have introduced the minions to the world, ‘Despecible Me’ and ‘Despecible Me 2.’ The animated movie will have voices of Jon Hamm, Michael Keaton, Alison Janney, and Steve Coogan, according to Variety.

Scarlet Overkill is voiced by Bullock. During the premiere in London, Bullock posed with the three minions that the movie is set to revolve around. She was also joined by directors Pierre Coffin and Kyle Balda outside the Odeon cinema in London’s Leicester Square, according to The Telegraph.

Speaking to the new agency about the premiere in London, she said, “There’s something about London that gets everyone in a good mood. Everyone’s skipping down the carpet rather than sauntering.”

And talking about her character Scarlett, she said, “She’s more like me than anything else I’ve been in. She’s evil, she’s crabby and a little bit bitchy all the traits that I think make for a good villainness.”

“Now I understand how the people who play the Joker feel. It’s fantastic being the first female super-villain.”

The movie has premiered in London, and is scheduled to be released in the United States on July 10, 2015.