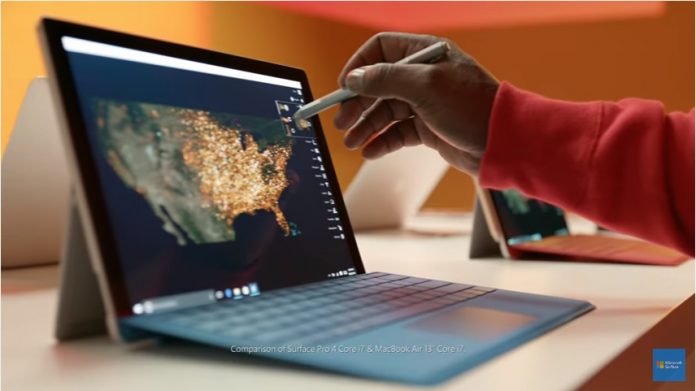 Just like other tech vendors, Bill Gates’ Microsoft has kept its silence about their hyped devices, one of which is the rumored latest render of the Surface Pro. Fans of the Surface lineup are pretty much aware by now that the yet to be revealed hybrid will be armed with upgraded specs which will definitely make it a pricey piece of slab as soon as it hits the shelves.

Speculations about the handheld are getting rife by the day as avid followers of Microsoft alongside several tech fanatics theorize that the much-talked-about tablet could finally be unveiled at the tech firm’s event next month. This rumor has been reinforced early on as spy shots of Microsoft’s picture gallery inside their corporate building in Washington seem to hint on the possible reveal of the said device, not to mention three more gadgets that are scheduled to be introduced next year.

Nevertheless, there are some keen thinkers who have deduced that Microsoft’s upcoming event may not introduce the hybrid’s latest iteration and will instead announce the tech vendor’s rumored Surface all-in-one PC codenamed “Cardinal.”

It was previously highlighted that the Redmond-based giant is in the process of putting their current Windows 10 operating system on another level and that the latest “Redstone 2” update, which is the fourth milestone within the mentioned OS, will arrive in 2017.

Aside from the improved OS, the company also plans on equipping the device with Intel’s successor to the Skylake chip, the Kaby Lake, which could be the perfect ingredient that will yet again give other forthcoming tablets a run for their money.

Given the two major tweaks for the said 2-in-1 device, it is said that its base version will be priced at around $1,000 which is $100 more than the price of its current render.

'God of War 4' to move to Norse mythology, stars older...