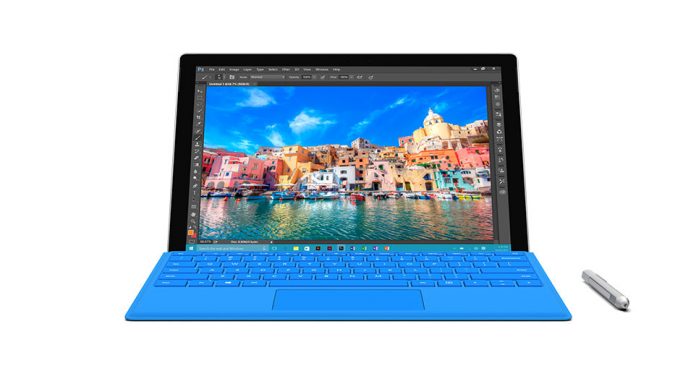 The successor to Microsoft’s Pro 3 has been released by the tech giant as is now available for pre-order. Called the Surface Pro 4, this tablet has a lot of features, and it can be used to fully replace a laptop.

Powered by Windows 10, the Surface Pro 4 has a 12.3-inch PixelSense display. It has low glare and extremely low contrast for optimum viewing experience. According to Gizmodo, it has a resolution of 267ppi (2736 x 1824) or “three pixels per inch more than the iPad Pro.” In addition, it comes with a 0.4mm Gorilla Glass, which will definitely make the touch experience a whole lot better than other tablets in the market nowadays.

Compared to the Surface Pro 3 that has a weight of 1.76 lbs, the new tablet only weighs 1.69 lbs or 766 grams. Moreover, it’s thinner because of the new cooling system used by Microsoft. At just 8.4mm unlike its predecessor’s 9.1mm, users can put their Surface Pro 4s anywhere with ease.

To turn the device into a functioning laptop, a Type Cover and multi-position kickstand can be used. Users can choose between the normal Type Cover (QWERTY, right click button, and full row of function keys) or the one with Fingerprint ID.

Inside, the Surface Pro 4 is powered by a 6<sup>th Gen Intel Core m3 for the base model. It can be improve to i5 and i7 with 515, 520, and Iris GPUs as reported by Forbes. Choices for RAM are from 4GB to 16GB, and storage can range from 128GB to 1TB. However, for those who want to get the most out of their tablet, they can configure their order. On their website, users can mix and match the processor, memory, and storage.

In terms of battery life, based on the test conducted by the company in September 2015 on an Intel Core i5, 256GB, 8GB RAM version, the battery lasted for 9 hours. The test included video playback and default settings.

Other features of the Surface Pro 4 include markup webpages and full Office support. Using a Surface Pen, users can write directly on pages and share them instantly.

Starting at $899, the new Surface is available for preorder on the Microsoft Store.