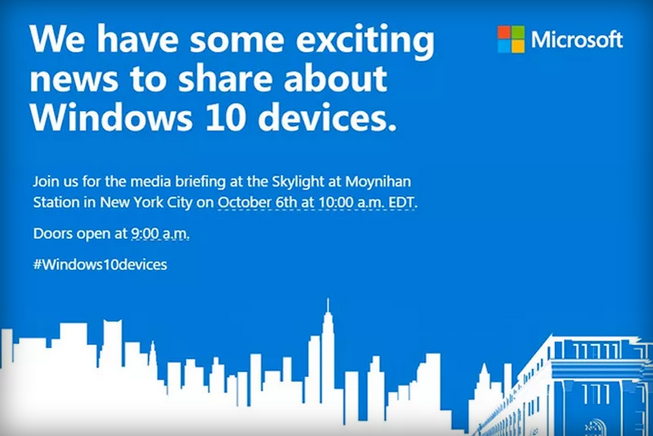 The all-new Microsoft Surface Pro 4 tablet, along with the launch of the two long rumored Lumia smartphonesthe Lumia 950 and Lumia 950as well as the Microsoft Band 2 will be launched on a Windows 10 event by Microsoft on October 6.

As reported by The Verge, the invitation sent out by the tech giant introduces a press event in New York on October 6 to unveil the company’s newest line of devices running on Windows 10.

“We have some exciting news to share about Windows 10 devices,” said the invitation.

The event will take place at Skylight at Moynihan Station in New York, at exactly 10 AM EDT, where gates will open at 9 AM.

While no specifics were given in the invitation, it was confirmed that Microsoft will be unveiling the new Surface Pro 3 tablet, along with two new Lumia Windows smartphonesthe Lumia 950 and Lumia 950 XL, and the Microsoft Band 2.

Not much is known about the specs of the Surface Pro 4 right now, only that Microsoft has a lot of possibility on improvements when it comes to camera power, processor, and size. Even a fingerprint scanner embedded on the touchpad is expected by some.

As for the Lumia 950, rumors have said that the said smartphone will sport a 5.2-inch OLED display with a Quad HD resolution. It runs under a 64-bit hexa core Snapdragon 808 chipset. It is expected that it will pack 3 GB worth of RAM, with 32 GB worth of built-in internal storage, with support for an external microSD expansion. As for the camera, a 20 megapixels PureView rear camera is expected, along with a 5 megapixels front snapper. IT features a USB Type-C port, support for Qi Wireless Charging, and is powered by a 3,000 mAh battery.

The Lumia 950 XL is expected to be having a 5.7-inch display with the same Quad HD resolution, a 64-bit octa-core Snapdragon 810 chip, and 3,300 mAh battery juice to power the device.