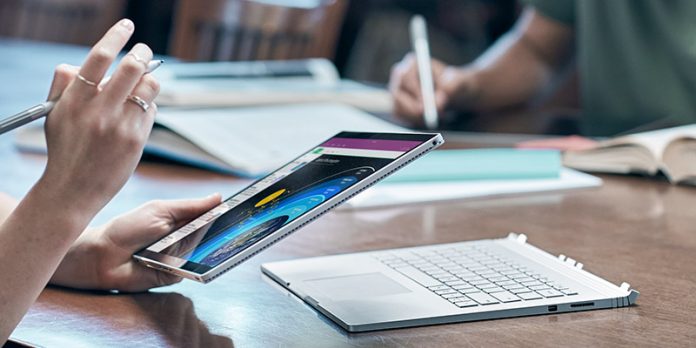 Who wouldn’t like a hybrid tablet that functions as a personal computer? It is a known fact that Microsoft Surface Book is a hit. But, it won’t be long until consumers can get a hold of the new Surface Book, according to some sources.

DigiTimes has learned that the second generation of the Surface Book lineup is already in mass production, and it is scheduled to be released worldwide in the next few weeks. A source informed the online publication that a new notebook with a touchscreen will be out on the market by the end of March or in April.

As for the physical features, nothing much has changed because Surface Book 2 will still have 13.5-inch screen display size, and it would be made of magnesium-aluminum-alloy, but it is expected to have a clamshell design rather than the usual 2-in-1 feature.

According to sources, the multinational company has discovered that the detachable screen feature of the Surface Book has created conflict with the Surface Pro lineup. Hence, Microsoft intends to redesign the laptop and make the upcoming version of Surface Book more affordable.

That being said, the starting price of Surface Book 2 is expected to be lower than its predecessor. A source mentioned that the new product will be sold at around US$1,000, which is more budget-friendly than the current Surface Books, with prices ranging from US$1,499 to $3,199.

The shipments of the next-generation laptop are expected to reach 1.2 to 1.5 million units in 2017. As for the Surface Pro, shipment will probably increase by 20 percent this year.

Recently, the Microsoft online store has made a price cut for the Core i5 128GB model of Surface Book, from US$1,499 to US$1,299. The discounted product has a sixth-generation Intel Core i5 with 8GB RAM. It has the Windows 10 Pro operating system already installed, and it comes with a free Surface Pen.

Acer Predator 21X vs Alienware 17 specs comparison: Which is the...