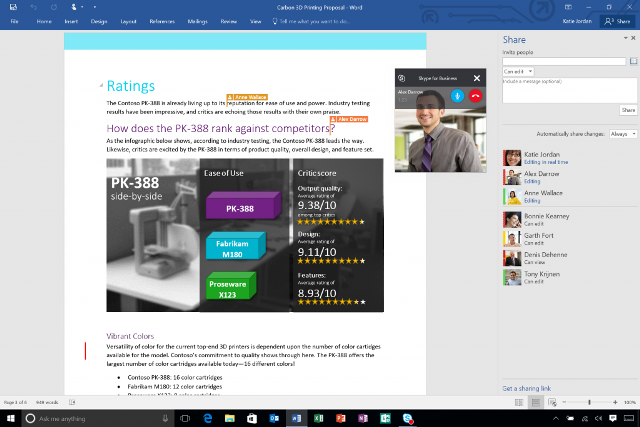 The much-awaited 2016 edition of Microsoft Office is officially out for all Windows and Mac users. Packed with a lot of new features, MS Office 2016 are available for new users and all Office 365 subscribers.

According to Microsoft’s Corporate Vice President for Office Client Applications and Services team Kirk Koenigsbauer in his post on the company’s blog, “We set out to make working together easier and more impactful by building a suite of integrated apps and services that removes barriers and empowers teams to do and achieve more.”

The new Office 2016 is centered on collaboration, so most of the developments are geared towards working with groups or teams in workplaces.

Skype for Business is one of the new features introduced by Microsoft. This will allow clients to send instant messages, screen share, or video chat straight in the documents. Real-time co-authoring is also made possible.

Another component is Office 365 Planner. This will let users organize and designate tasks, update project status, set deadlines, and create new plans that can be sent to each team member. With notifications sent via email and displayed on the application’s dashboard, every person connected to a certain account will be informed on changes and progress.

To help users get things done quickly individually or in groups, Microsoft developed Smart Lookup and Tell Me for the 2016 client app, which will help find the most appropriate Office feature and web insights.

Although most features are compatible with older versions of Windows, the new Office and Office 365 works best with the recently rolled out Windows 10. Cortana, artificial personal assistant for the OS, will have Outlook 2016 support and get better options in the coming months.

Mobile devices running Windows will now be able to act like desktops allowing users to create, edit, and project presentations through Office Mobile apps and Continuum.

Mac users who are Office 365 subscribers are not left behind with the launch. New versions of MS Office apps are released, and one-time purchase of Office 2016 is made available.

Lumia 550 news: Device goes on sale in India at around...