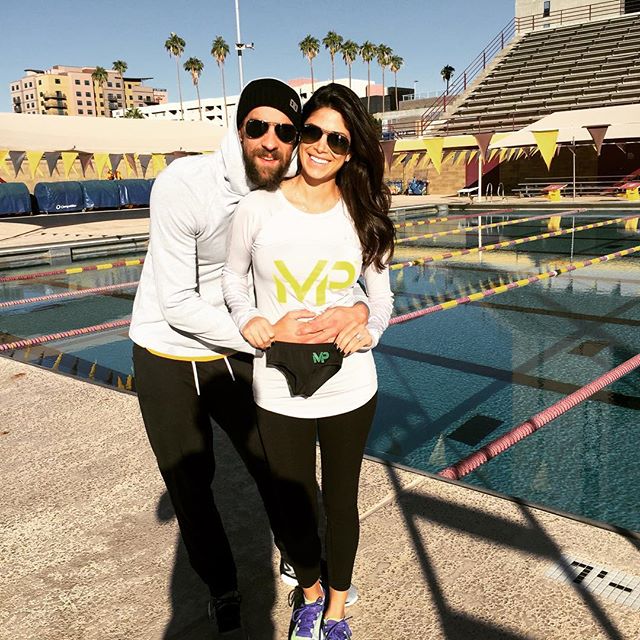 On Wednesday, Nov. 18, competition swimmer Michael Phelps made a big announcement on his Instagram page. The Olympic gold medalist broke the news that he and his fiance, former Miss California Nicole Johnson, are expecting a child.

Phelps posted a photo of himself hugging Johnson as she holds up a pair of baby swim trunks with the Michael Phelps logo. According to the Olympian, the couple first found out that Johnson is pregnant eight weeks ago. He said that Johnson just passed the 12-week mark and that they recently found out that they are having a baby boy.

The 30-year-old beauty queen also shared the same Instagram photo, saying, “Today marks 12 weeks and 5 days of us having a little one and yesterday we learned we’re having a BOY. We couldn’t be happier!!”

Phelps and Johnson met in 2007 and dated on and off before announcing their engagement in February. In an interview with The Baltimore Sun in April, Phelps talked about reconnecting with and asking Johnson to marry him.

He told the newspaper: “I said to a couple of my friends if I ever had a chance to get her back, that would be it. She was the one that I loved the most. I never wanted to have a what if, and I told her exactly how I felt.”

He also said that the decision to propose to Johnson was an easy one. However, the wedding will not take place until after the Olympics.

Phelps has had some notable ups and downs in the last few years, including a DUI arrest, suspension from the USA swimming team, checking into rehab, coming out of retirement, getting engaged, and  recently  swimming his fastest 200-m breaststroke.

The 30-year-old Olympic swimmer will have a big year ahead as he sets his sights on the 2016 Summer Olympics, which will be held in Rio de Janeiro and is slated to run from Aug. 5 to 21. At the same time, Phelps will be preparing for fatherhood. The couple is expecting their child in May 2016.