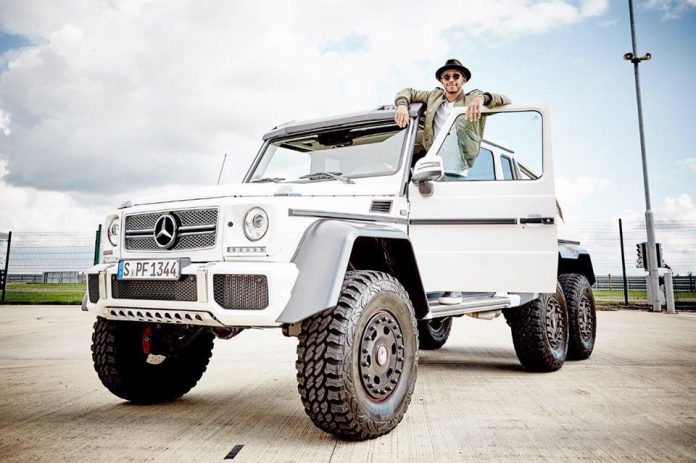 Car enthusiasts who are looking for a beastly and extreme road-legal SUV may be delighted to find out that Mercedes-Benz has created their largest model to date, the “Mercedes G63 AMG 6×6.”

The 30-year old British racecar driver posted a photo of himself together with the vehicle on Facebook and captioned it with, “So…. Thinking about getting this bad boy. What do you think?”

Officially described as “the last word in forward-thrusting power for the beaten track,” reports claim that it is no longer in production after Mercedes offered only a limited number of units.

According to Autocar, the vehicle which features six driven wheels has a low range gear, five differential locks and tire control system, operated by three switches on the board.

Under the hood, G63 AMG 6×6 is equipped with 5.5-liter twin-turbocharged V8 engine that can produce 536 horsepower and torque of 560lb ft. which is important considering its weight of 3775kg. The fuel tank has an overall capacity of 159 liters.

The report added that the engine has the ability to alter high-range to low range ratio of 0.87:1 of on-road driving and 2.16:1 off-road conditions, respectively with a nominal 30:40:30 split among all the six wheels.

The wheels measure 37-inch length, 12.5in-wide and have bead-plate design and carbonfire guards as covers. While the entire dimension is 5875mm in length, 2110mm in width and 2210mm in height with a ground clearance of 460mm and fording depth of 1000mm.

Despite the bulkiness and the weight, it is reportedly easy to navigate with enhanced traction qualities combined with acceleration that is said to be at 0-62mph in less than six seconds and top speed of 100mph, controlled electronically.

Dubbed as the second most expensive SUV from the company and marketed for the wealthy clients one unit previously retailed at 370,000.