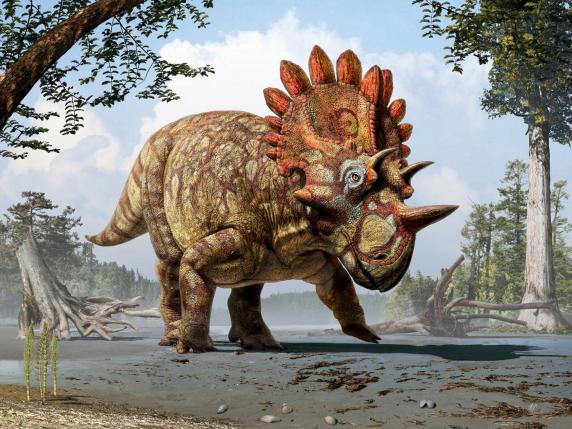 Scientists had a heck of a time getting the remarkable fossil of a dinosaur they dubbed “Hellboy” out of the hard limestone along a Canadian river bank where it was entombed for 68 million years, but the diabolic task proved gratifying.

The scientists on Thursday described one of the most unique horned dinosaurs ever discovered, a beast boasting an exotic set of facial horns and spines around the edge of the bony frill at the back its skull.

“This new animal is definitely one of the weirdest horned dinosaurs,” said paleontologist Caleb Brown of the Royal Tyrrell Museum of Palaeontology in Alberta. “How weird it is really only becomes fully apparent when you compare it to its close relatives, in which case it stands out like a sore thumb.”

But they nicknamed it “Hellboy” because its stubby horns above the eyes resembled the comic-book character of the same name and because of the hellish time they had in painstakingly extricating it from what they called “evil hard rock.”

“We did have an earlier, politically incorrect name for it, but with great effort we managed to stop ourselves using it after a few months,” Royal Tyrrell Museum paleontologist Donald Henderson said.

Regaliceratops, similar in size to today’s largest rhinos, was estimated at 16 feet (5 meters) long, 5 feet (1.5 meters) tall at the hips, weighing about 1.5 tons.

“Think of it like a big SUV,” Brown said.

The fossil was found in 2005 along the Oldman River in southwestern Alberta, with the tip of the snout sticking out of the cliff. Rather than being squashed flat like many fossils, the skull was in remarkable three-dimensional preservation.

Horned dinosaurs were a formidable group of Cretaceous Period plant-eaters. Regaliceratops lived near the end of the age of dinosaurs.

It possessed a large conical horn over its nose and a pair of small, forward-curving horns over its eyes that were puny compared to its bigger close relative, Triceratops. Seven bony spines in triangular and pentagonal shapes formed a halo around the edge of its large shield-like frill.

“The complete frill looks like a crown formed around the face of the animal,” Brown said.

Nearly the entire skull, but none of the rest of the skeleton, was found.