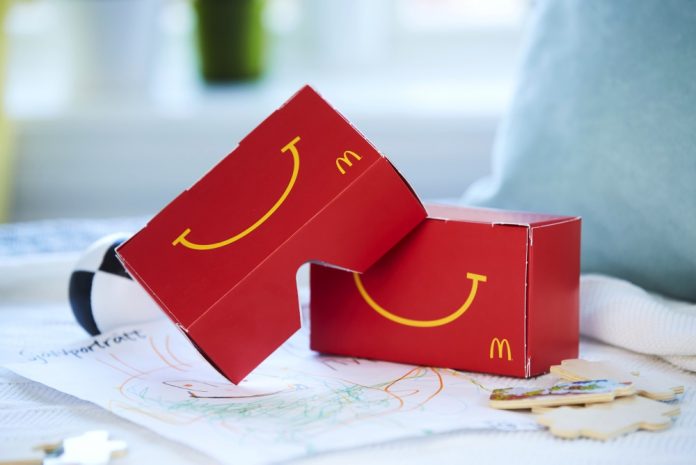 With the current race of tech developers such as Microsoft, Steam and Sony to come up with their own virtual reality headsets, an unlikely yet familiar name throws its hat into the ring. McDonald’s, the popular fast food brand, has decided to join the race and it seems to have quite an edge considering the prices of virtual reality viewers.

The surprising developer has opted to test the market in Sweden, the first area where they plan to launch a do-it-yourself virtual reality viewer, which they have opted to call the Happy Goggles.

According to Adweek, McDonald’s is launching the Happy Goggles this month, inviting children to turn their Happy Meal boxes into virtual-reality viewing devices by following simple instructions. It will reportedly be available in 14 restaurants and the price is estimated to be $4.10.

The company also provided a video guide in order to teach people how to turn their Happy Meal box into a pair of Happy Goggles.

The launch is ideally tied to the Swedish recreational holiday Sportlov, when families spend time together skiing. To further support this release, McDonald’s has developed a ski-themed virtual reality game called “Slope Stars,” which is best experienced with the Happy Goggles.

According to the website of Happy Goggles, the name of the game is “Beware of the Hill” and this is supported by the Swedish Alpine ski team. While the game can be played without the viewer, using the Happy Goggles will offer the full experience.

The idea to join the virtual reality race could have been inspired by the Pizza Hut endeavor to turn used boxes of pizza into a projector.

Depending on the popularity of the upcoming virtual reality viewer, this could be offered worldwide assuming it becomes a hit with the people of Sweden.