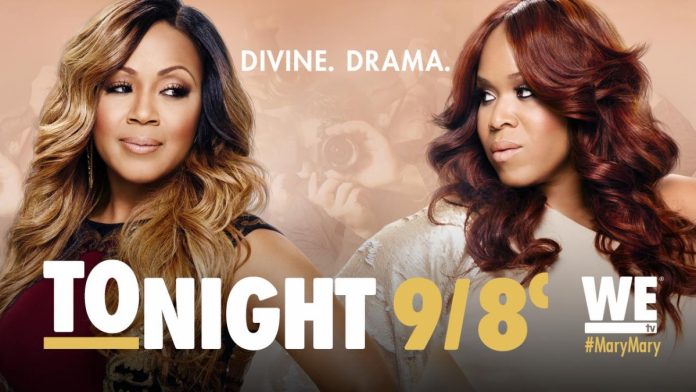 We TV’s reality series “Mary Mary” about the gospel singing duo Erica and Tina Campbell will have more drama in store for the fans.

According to reports, Erica and Warryn Campbell may have some arguments as she will find out what he has been really up to as he will try to pay Sony the money he owed.

Warryn will meet up with a guy who will convince him that there will be a new artist to launch. If all goes well, the newcomer to the industry may be the answer to Warryn’s troubles with his reportedly seven-figure debt to Sony. Viewers may remember that he accepted the money from the record label with the agreement that Mary Mary will release a new album. However, since Tina refused to take a break from her solo career, the album has still not come into fruition.

“My money situation is really starting to weigh heavily on my mind. Do I take this money and risk getting in even more trouble with some people I probably shouldn’t be messing with?” Warryn said to the camera.

Erica will notice that something is not right when she calls her husband, but he does not pick up. “Something’s going on with Warryn Campbell. I’ve been trying to call him and he’s not picking up the phone,” she said.

Although the narrative features the sisters having some disagreements on when to start developing their next album they are contracted to release, Erica stated, “I’m hoping that what people are seeing is the fact that we stick together. And even though we argue big, we love big as well.”

Tina shared the same sentiment, “We do fix everything. We do work through everything. The next moment could be a great moment, but if the bad moment is better, that’s what you show.”

New episodes of “Mary Mary” airs every Thursday at 9 P.M.

'A Series of Unfortunate Events' news: Lead roles of Violet and...