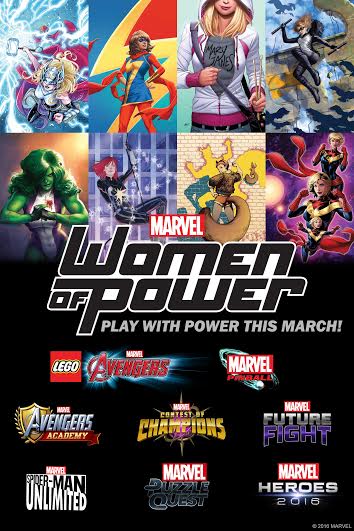 Marvel Games will be holding a special gaming event across different titles and gaming platforms, with the theme of “Women of Power.” The event will feature new characters and in-game content for a number of Marvel titles for consoles, PC, handhelds, as well as mobile devices.

As reported by Marvel, the event will coincide with Marvel Publishing’s “Women of Power” initiative, a comic book event that will feature 25 new comic book covers focused on various popular female characters from Marvel.

“Marvel’s ‘Women of Power’ event celebrates some of the most popular heroes and villains in the Marvel Universe, bringing them together in a unique way for the first time,” said Peter Phillips, EVP/GM, Interactive and Digital Distribution, Marvel Entertainment. “By featuring these stories and characters throughout a single month, we’ve lined up one the most exciting events in the history of Marvel games.”

“LEGO Marvel’s Avengers” will be having a new DLC pack which will add three new characters to its roster of heroes and villains. The upcoming pack will introduce Captain Marvel, Moonstone, and the super villain Poundcakes.

Mobile game “Marvel Contest of Champions” will have a new special event quest featuring Kamala Khan, aka the new Ms. Marvel. Ms. Marvel will also be available as a playable hero, as well as two othersShe-Hulk and X-23.

“Marvel Avengers Academy” will have a special event that will feature the coming of several all-new female characters to the superhero academy game.

Another hit mobile game, “Marvel Future Fight,” will see the arrival of Proxima Midnight in an all-new in-game event.

“Spider-Man Unlimited,” meanwhile, will feature Spider-Women, with the highlight on Silk.