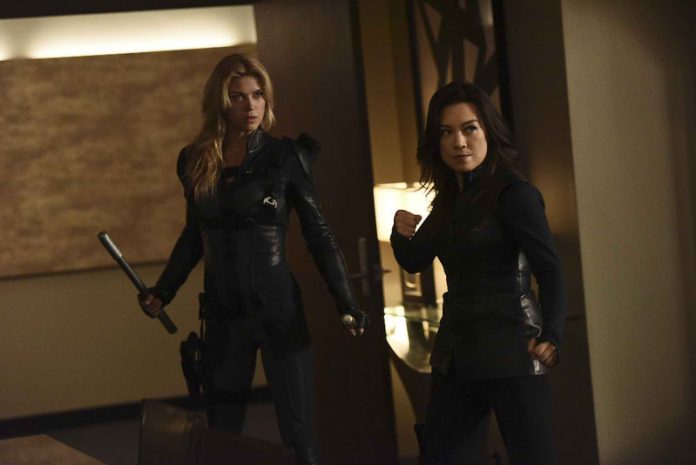 In ABC’s hit Marvel series “Marvel’s Agents of S.H.I.E.L.D.,” both Agent Bobbi Morse and her ex-husband Lance Hunter are still part of Coulson’s team of agents inside the now underground S.H.I.E.L.D., especially with their ongoing fight with all the Inhumans that threaten the safety of the world. However, it appears that the old lovers will not be enjoying working with the team for long, for they will be on the runwhich will have them, in turn, spinoff their own new TV series on ABC.

ABC recently released as reported by Deadline the set of new and upcoming series that will air on the network in the following months. One of them is the previously announced “Marvel’s Most Wanted,” which is a spinoff of the hit series “Marvel’s Agents of S.H.I.E.L.D.” The new series will have actress Adrianne Palicki reprise her role from “Agents of S.H.I.E.L.D.” as Agent Bobbi Morse aka Mockingbird and Nick Blood on his role as Bobbi’s ex-husband Hunter.

Apparently, something will make the duo leave the team as marked targets, from being one of the best assets Coulson has. The synopsis for the new series is as follows:

“Centers on Bobbi Morse (a.k.a. Mockingbird) and Lance Hunter of ‘Marvel’s Agents of S.H.I.E.L.D.,’ two ex-spies and ex-spouses who are on the run with no friends, no S.H.I.E.L.D. and a long list of enemies looking to claim a bounty on their heads. Able to trust no one but each other, Bobbi and Hunter form an uneasy alliance with Dominic Fortune, a rogue adventurer with a wealth of resources and even more adversaries, who agrees to protect them so long as they help him with his own agenda. These two heroes will help anyone in need, all while trying to uncover the conspiracy that put their own lives in jeopardy.”

The series will also star “Gone in 60 Seconds” and “Point Break” actor Delroy Lindo in the role of Dominic Fortune. Jeffrey Bell and Paul Zbyszewski will serve as writers, with Jeph Loeb and Jim Chory as executive producers.

'The Flash' Season 2 spoilers: Barry forms an unexpected alliance to...