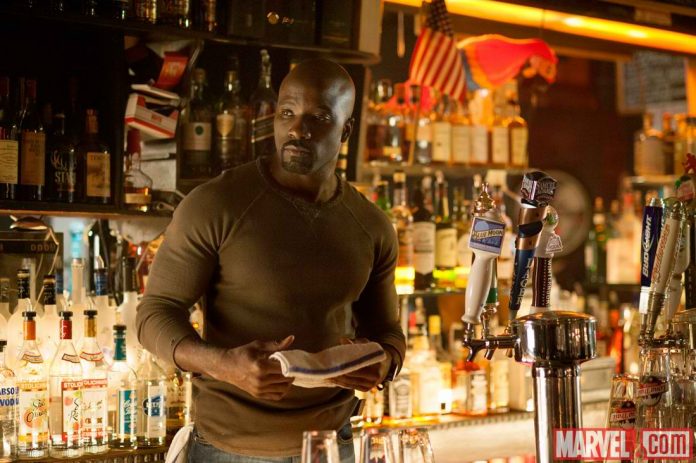 While Marvel Studios is getting bigger and bigger on the big screen, and Marvel TV via ABC is getting steady success on Marvel’s Agents of S.H.I.E.L.D., the building Netflix team of The Defenders is also growing, with Daredevil and Marvel’s Jessica Jones now on the team, and will shortly be followed by Luke Cage.

In a recent interview with ComicBook.com, actor Mike Colter talked about his role as Luke Cage, and how he will be seen in Jessica Jones, as well as his own stand-alone series. While he was naturally bound to secrecy with Marvel, the actor was allowed to let fans in to some good info about the new hero in the Marvel Cinematic Universe.

“I can tell you what they’ve allowed me to, which is basically, Luke Cage will take place a few months after Jessica Jones,” Colter said. “So in real time, if you watch Jessica Jones, you’ll find [at the end] Luke Cage uptown in Harlem, working, trying to make ends meet. Luke Cage really hasn’t figured out what he’s doing. He’s tending bar, he’s bouncing around. And for good reason, he’s a fugitive, he has some skeletons in his closet.”

However, trying as hard as he could to live a normal life, it seems that being a hero runs within him.

“He’s trying to basically stay off the radar. The people he hangs around with, though, are in need. Ultimately, he’d rather be alone, but with the way he’s equipped he does step up. That’s what it’s about, it’s about finding that inner feeling to make you want to take action. Sometimes we just sit around, and sit on our hands and don’t do anything because it’s like ‘hey, that’s not my problem.’ You can’t do that when you’re a superhero. You have these gifts, now use them.”

Luke Cage will first appear on Marvel’s Jessica Jones, which premieres its first season on Netflix on November 20.

Josh Duggar fired by TLC from hit show 19 Kids and...