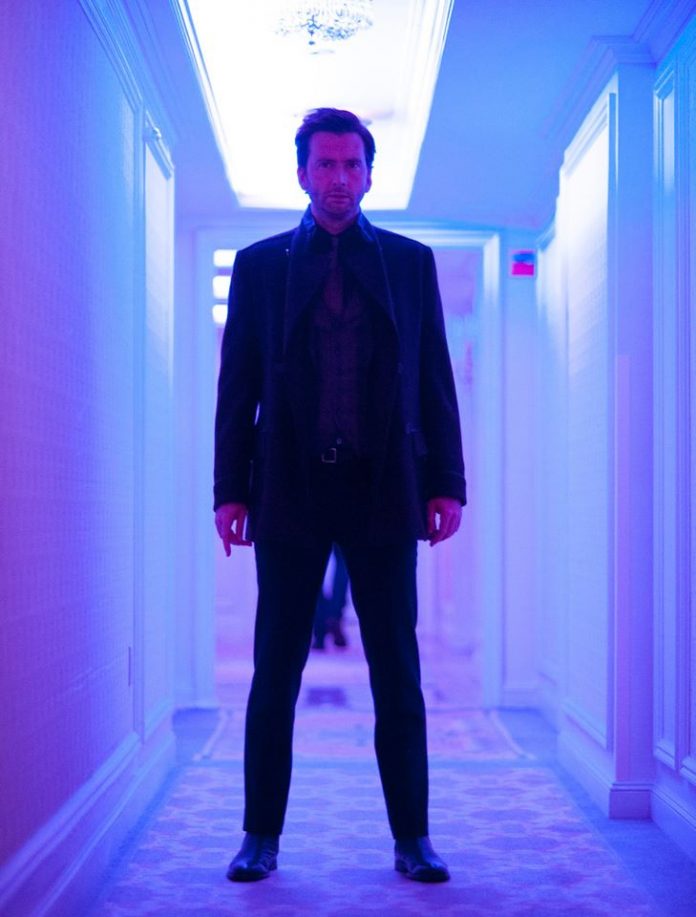 A few weeks before the much awaited release of the first season of “Marvel’s Jessica Jones” on Netlfix, the network released a set of behind the scene photos, showing excited fans more of the world of Jessica Jones.

One of the photos released features David Tennant as the season’s main villain Kilgrave. Tennant is shown standing in a hallway, where his surroundings give off a fitting hue of purple. As was previously known, Tennant’s Kilgrave in the show will look nothing like The Purple Man in the comics, as he will be shown to look like an ordinary human, not clad in purple-colored skinbut with some aspects of his clothing going by the purple trademark.

True to that, one photo clearly shows Tennant as Kilgrave wearing a three-piece suit, with a purple shirt under it.

The new Netflix series takes on the story of Jessica Jones, someone who just retired from her short-lived and tragic career of being a superhero. Now she is a private detective where she specializes in cases involving people with extraordinary powers. Show executive producer Melissa Rosenberg described the character of Jessica Jones as an “incredibly flawed, damaged and interesting character regardless of gender.”

The show follows the successful “Daredevil”, and will then be followed by stand-alone Netflix series of Luke Cage and Iron Fistand finally bringing all of them together for The Defenders.

Krysten Ritter plays the titular character, and she is joined by Mike Colter as Luke Cage, as he is set to appear on the show first before having his own stand-alone series. Other cast members include Rachael Taylor as Trish Walker, with actors Carrie-Anne Moss, Eka Darville, Erin Moriarty, and Wil Traval among others. Tennant, playing the season’s main villain, have previously appeared on “Doctor Who”.

“Marvel’s Jessica Jones” will be released on Netflix November 20.