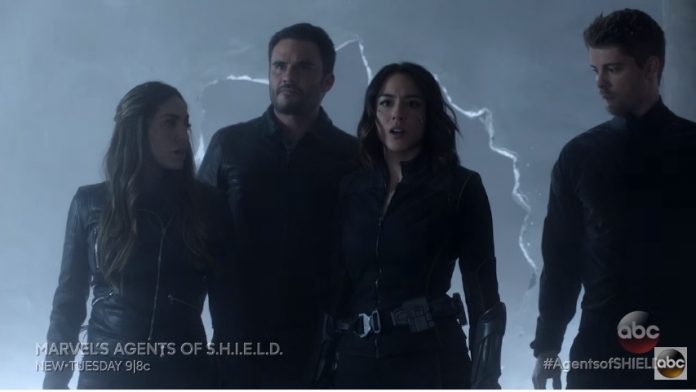 “Marvel’s Agents of S.H.I.E.L.D” TV series has stayed true to its season 3 episode 16’s promise of revealing the anticipated “Secret Warriors” as the recently aired episode 17, titled “The Team,” gave the viewers the first glimpse of Daisy Johnson’s (Chloe Bennet) team of “Inhumans.”

“The Team” started with the usual thrilling action scenes, but quickly took a turn when Daisy was revealed to have been helping the Hive avoid being in contact with S.H.I.E.L.D during the rescue.

S.H.I.E.L.D. started dealing with trust issues as a series of events pointed to Joey (Juan Pablo Raba), Yo-Yo (Natalia Cordova-Buckley), or Lincoln Campbell (Luke Mitchell) as the traitor. Episode 17, however, concluded with Daisy’s unanticipated revelation to Lincoln, turning out to be the one infected by the Hive. “I’m happier than I’ve ever been. I’ve found the answer to the emptiness,” she said to Lincoln.

In an exclusive interview with ET Online, Bennet shared her experience with the preparation of the Secret Warriors team which was introduced to the series by the end of the second season and has been a central plot in the progression of the third season. She said, “We had some really awesome key moments together, and for someone who is a fan of the comic books, and the Secret Warriors, it really delivers. But it quickly changes, and it turns into one of the most intense episodes of the season so far.”

Bennet told the fans before the episode aired that they would see the Inhumans work together again, but not in the scenarios that they would think. With Daisy stealing the Kree sphere and a handful of Terigen crystals and consequently leaving the base with her power destroying the hangar, the fate of the Secret Warriors team becomes uncertain.

In the upcoming episode 18, titled “The Singularity,” agents Leo Fitz (Iain De Caestecker) and Jemma Simmons (Elizabeth Henstridge) will follow a lead in their attempt to stop Daisy in her tracks.