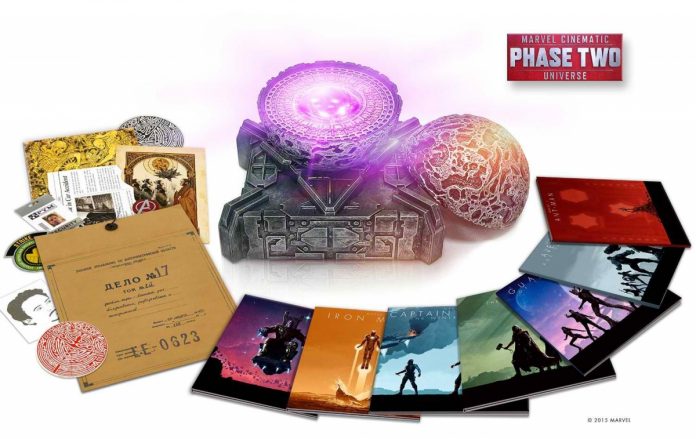 Marvel has announced the release of the 13-Disc Marvel Cinematic Universe: Phase Two Collection. The collection set will be exclusively available through Amazon and will release on December 8.

The second part of the ultimate Marvel Cinematic Universe collection set will let the most dedicated MCU fan “to hold the greatest power in the cosmos in your grasp”, as it comes with an exclusive 1:1 scale replica of the Morag orb containing one of the Infinity Stones, as seen on Guardians of The Galaxy., and come in collectible packaging designed by artist Matt Ferguson. The Marvel Cinematic Universe: Phase Two Collection contains six movies that encompass the entire Phase Two of the MCU, starting from Marvel’s Iron Man 3 to the latest Marvel’s Ant-Man. Each movie has a Blu-ray 3D disc, a regular Blu-ray disc, and a Digital Copy. Movies included in the collection are:

The Bonus Disc includes special features such as the From Here To Infinity: Phases 2 & 3 Of The M.C.U. feature, which discusses the world of Phase 2 and opens up Phase 3, Phase 2 Tag Scenes: A Making-Of, which discusses how all the post-credit scenes for each film was made, the complete set of all Marvel One-Shot short films, and Deleted Scenes and Production Creative for each Phase 2 film.

The Phase Two Collection also comes with a lot of freebies for fans. Each set of the Limited Edition collection will include a gold-foiled page from the book of Dark Elves, an ancient drawing from the Morag vault, Avengers and S.T.R.I.K.E. uniform patches, a replica of the temporary tattoo Tony Stark had on Iron Man 3.

The Marvel Cinematic Universe: Phase Two Collection is now available for pre-order on Amazon for $219.99

'GTA 6' release date, news: Game's development cost could be cause...