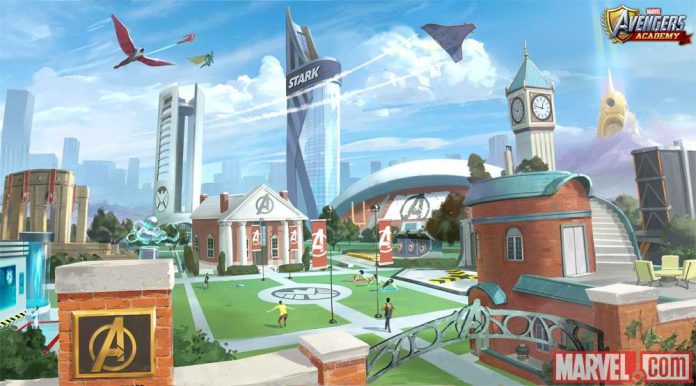 Get ready for some superhero action, as Marvel Comics, in partnership with mobile game developer TinyCo introduces the new iOS and Android mobile game coming to fans early next year”Marvel Avengers Academy”.

“Marvel Avengers Academy” give fans and players a break from all the breathtaking and intense fighting of heroes against supervillains in mostly potentially catastrophic world-devastating scenarios, as the game focuses on players developing and building up a superhero that they have dreamed of.

In the new adventure role-playing game, players will get to see the same favorite characters from MarvelCaptain America, Thor, Loki, Iron man, Black Widow, Hawkeye, Falcon, The Wasp, and many morereimagined as young adults attending the superhero school Avengers Academy. The Avengers Academy is complete with all the facilities for molding a superhero, from training facilities, combat arenas, to dormitories for the students, laboratories, classrooms, sports stadiums, and many more.

But school may not be as dull as writing reports and taking those exams. Since it’s about being a superhero, the students will be uncovering intergalactic artifacts and building new experimental tech as part of their Academy activities.

But aside from the routine activities at the Academy, the young heroes will also embark on missions beyond in the Marvel Universe to build their skills, and also perform in extra-curricular activities from time to time.

But of course, the school life of a superhero would not be complete without the challenges of maintaining a good social life. Heroes at the Academy must also learn how to make good friendsand deal with inevitable enemies, tooand even go out on dates with fellow superhero students, all the while surviving the struggle of becoming a superhero.

The game is written by Allen Warner, with art design by Marvel cover artist David Nakayama. Developed by TinyCo, enroll to become a superhero on “Marvel Avengers Academy”, coming for iOS and Android devices early 2016.