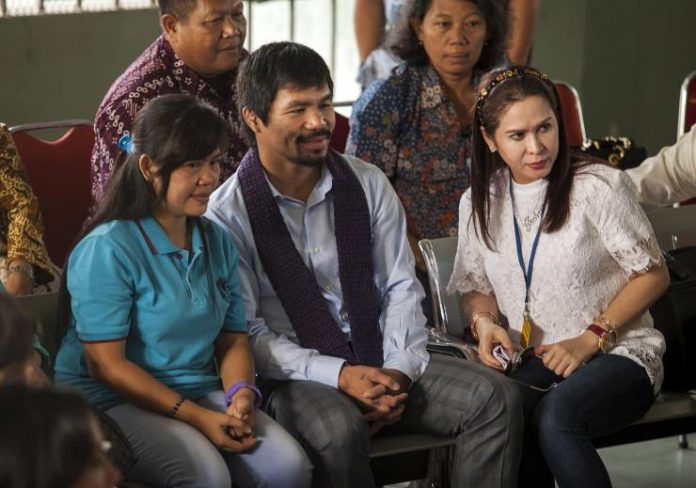 Filipino boxing superstar Manny Pacquiao has downplayed his boxing promoter’s criticism of his decision to skip rehab for his shoulder injury, while a Mayweather relative predicts that there will be no rematch for the two fighters.

Pacquiao has earned the ire of Top Rank promoter Bob Arum after he failed to appear during a scheduled meeting with a therapist to address the torn rotator cuff that he sustained during his bout with Floyd Mayweather Jr. last May.

The missed appointment has prompted Arum to refer to the boxer as “irresponsible,” the International Business Times reported.

“[Manny Pacquiao] promised me he was leaving for the U.S. this weekend [July 18] which he’s not,” the promoter is quoted by IB Times as saying.

The report also said that Arum is not scheduling any fight for Pacquiao until he is medically cleared by doctors for his injury.

Pacquiao responded to Arum’s statement, saying that he believes Arum is only voicing his concern for the boxer. While he says that he appreciates the promoter’s concern, Pacquiao says the Top Rank chief has nothing to worry about as he is undergoing his own rehab.

On the other hand, the Latinos Post said that Jeff Mayweather, an uncle of Floyd Jr., said that the undefeated champ is unlikely to give Pacquiao a rematch as the Filipino did not admit defeat but instead blamed his loss on his shoulder injury.

“[Pacquiao] didn’t man up and say that Floyd was the better man, and now Floyd doesn’t want to give him a rematch just based on that. He wasn’t man enough to say that he lost the fight,” the article quoted Jeff as saying.

Jeff also criticized the injury, stating that it wasn’t there during the fight at all. He said that a torn rotator cuff will not allow shoulder movement at all, but Pacquiao didn’t complain at all while the fight was ongoing.