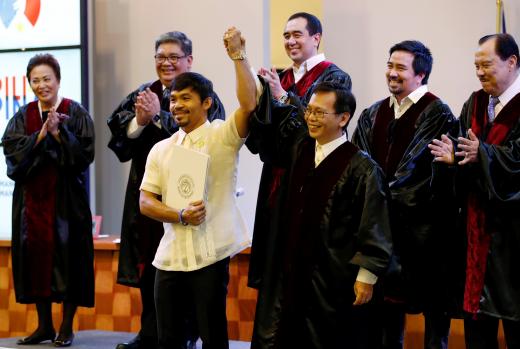 The recently retired eight-time division world champion Manny Pacquiao is now a newly elected senator of the Philippines, silencing rumors of him returning to the boxing arena. But could the upcoming Rio Olympics or a possible match with Floyd Mayweather Jr. coax him back into the ring?

After he convincingly defeated Timothy Bradley for the second and probably the last time at the Metro Goldwyn Mayer (MGM) Grand Garden Arena in April, the senator has repeatedly stated that he’s retired and it will stay that way so he can focus more on the political arena.

Having said that, boxing fans across the globe are not yet convinced that he is done with the sport. Many are still hoping that he and the undefeated Mayweather would step inside the ring once again for another 12-rounder.

Another scenario that would prompt his return would be the 2016 Rio Olympics this August.

With the decision to allow professional boxers to compete in the Rio Olympics, there’s a possibility that he’ll be hitting the Wild Card Gym again.

But the thing is, he will be breaking his promise not to step inside the ring and he could be criticized for such yet again.

The International Boxing Organization (AIBA) is just one of the numerous groups that is not buying the boxer’s claim. They even gave Pacquiao plenty of time to reconsider and if he agrees, the boxing icon will be given a wild card ticket to the Rio Olympics.

AIBA president Dr. Wu Kuo-Ching met with Association of Boxing Alliances in the Philippines (ABAP) executive director Ed Picson who also voted in favor for professional boxers to compete in the Rio Olympics and told the ABAP official that he respects Pacquiao’s decision not to compete.

Meanwhile, Picson pacified fears that some professional boxers might beat amateur boxers to a pulp, pointing out that AIBA referees are very much qualified that they can call for a stoppage even after one solid punch.