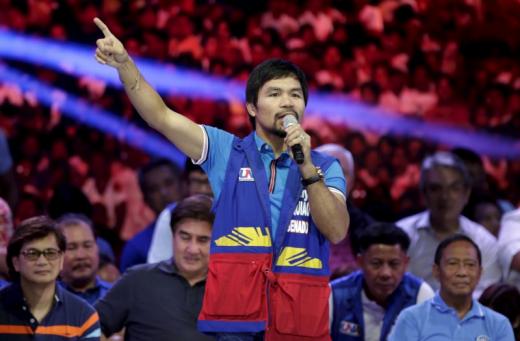 Renowned boxing fighter and eight-time world champion Manny Pacquiao (57-6-2, 38 KOs) will have his touted final match in his career against Timothy Bradley (33-1-1, 13 KOs) on April 9 at the MGM Grand in Las Vegas, Nevada. However, if he decides to change his decision, speculations suggest that it is possible that his next fight will be with Terence Crawford.

According to Boxing Scene, Pacquiao’s longtime trainer Freddie Roach and promoter Bob Arum are a little skeptical about his retirement. The latter shared to the news outlet, “If he wants to keep fighting, of course I’ll promote it, but that decision is up to him.”

Arum said that he believes a showdown with WBO 140-pound champion Terence Crawford (27-0, 19 KOs) may be perfect during the fall. Crawford will return on Feb. 27 in an HBO-televised title defense against Hank Lundy to be held at The Theater in New York’s Madison Square Garden.

“If he beats Lundy, we’ll do one more with Crawford in June or July and then I want a big fight for Crawford, big pay-per-view fight. We’ll look at what’s available. If Manny beats Bradley and decides that he wants to keep fighting, then Crawford is the perfect opponent,” Arum added.

Meanwhile, Pacquaio who is aspiring to have a senatorial position in the Philippines is currently under hot waters for his comments that are deemed to be homophobic.

Nike has also cut ties after almost a decade of having the athlete as one of their top endorsers, “We find Manny Pacquiao’s comment abhorrent. Nike strongly opposes discrimination of any kind and has a long history of supporting and standing up for the rights of the LGBT community. We no longer have a relationship with Manny Pacquiao,” a spokesperson said to MNSBC.

Pacquaio later apologized for his previous statement and claimed that he is not condemning anyone.

'Attack on Titan' season 2 news: May reportedly be released later...