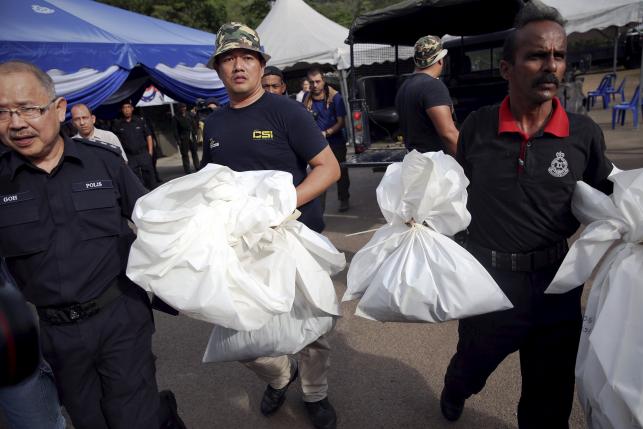 Malaysia has found 139 graves, and signs of torture, in more than two dozen squalid human trafficking camps suspected to have been used by gangs smuggling migrants across the border with Thailand, the country’s police chief said on Monday.

The dense jungles of southern Thailand and northern Malaysia have been a major stop-off point for smugglers bringing people to Southeast Asia by boat from Myanmar, most of them Rohingya Muslims who say they are fleeing persecution, and Bangladesh.

“It’s a very sad scene… To us even one is serious and we have found 139 (graves),” Malaysia’s Inspector General of Police, Khalid Abu Bakar, told reporters in the northern state of Perlis. “We are working closely with our counterparts in Thailand. We will find the people who did this.”

The grisly find follows the discovery of similar shallow graves on the Thai side of the border earlier this month, which helped trigger a regional crisis. After a crackdown on the camps by Thai authorities, traffickers abandoned thousands of migrants in rickety boats in the Bay of Bengal and Andaman Sea.

“We were shocked by the cruelty,” said Khalid, describing conditions at the 28 abandoned camps, scattered along a 50 km (30 mile) stretch of the Thai border, around which the graves were found in an operation that began on May 11.

Thousands of Rohingya Muslims are ferried by traffickers through southern Thailand each year, and in recent years it has been common for them to be held in remote camps along the rugged border with Malaysia until a ransom is paid for their freedom.

Past Reuters investigations have shown ransoms demands ranging from $1,200 to $1,800, a fortune for impoverished migrants used to living on a dollar or two a day.

Khalid said bullet casings were found in the vicinity and added there were signs that torture had been used, without elaborating. Metal chains were found near some graves.

The first decomposed body was brought down to a police camp set up at the foot of the mountains where the camps were found on Monday evening, an operation that took nearly five hours due to the roughness of the terrain.

“The body was only bones and little bit of clothing on it,” said Rizani Che Ismail, officer in charge of Padang Besar police department, adding that the cause of death was not immediately apparent.

Police chief Khalid said one of the grave sites was just 100 meters or so from the site where twenty-six bodies were exhumed from a grave in Thailand’s Songkhla province in early May.

Residents in the town of Wang Kelian, on the Malaysian side of the border, said they were used to seeing migrants in the area.

“They are often starving, not eaten for weeks,” said Abdul Rahman Mahmud, a resident who runs a small hostel. “They eat seeds or leaves or whatever they can find. It’s a real pity and it’s sad to see this.”

Thailand, under pressure from the United States to do more to combat people smuggling, launched a crackdown after finding the mass grave, since when more than 3,000 migrants have landed from boats in Malaysia and Indonesia.

Thai police said on Monday there were no human trafficking camps left in southern Thailand after a month-long crackdown.

But the crisis at sea is not over.

The United Nations refugee agency UNHCR estimated on Friday that some 3,500 migrants were still stranded on overloaded vessels with dwindling supplies, and repeated its appeal for the region’s governments to rescue them.

Malaysia and Indonesia have said they will allow the thousands still at sea to come ashore temporarily and ordered their navies to rescue people found adrift.

Thailand has said it will not allow migrant boats to land, but Prime Minister Prayuth Chan-ocha said on Monday the Thai navy would help those in medical need.

“I have ordered the navy to take our boats and set up a floating command center to help those who are hurt,” he said.

Most of Myanmar’s 1.1 million Rohingya are stateless and live in apartheid-like conditions in northwestern Rakhine state. Almost 140,000 were displaced in deadly clashes with majority Buddhists in Rakhine in 2012. They are denied citizenship and have long complained of state-sanctioned discrimination.

Myanmar denies discriminating against the group and has said it is not the source of the migrant problem.

Malaysian Prime Minister Najib Razak said in a post on his official Twitter account that he was “deeply, deeply concerned with graves found on Malaysian soil purportedly connected to people smuggling.

“We will find those responsible,” Najib posted in English.