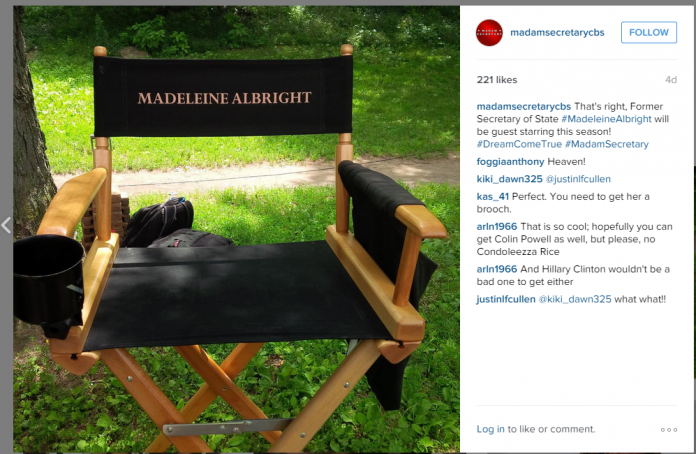 Leoni herself confirmed this in her Twitter account. The series will return this Fall and Albright’s appearance will be one of the most memorable highlights of the upcoming season.

Filming already began for this TV show and Leoni is deeply honored with the privilege of sharing the political drama’s set with such a distinguished guest. Albright also took her own photo and posted it on her Twitter account showing her appreciation for the opportunity to make use of her service in a different way. This mutual admiration might just play out really well in the actual dialogue that they will do on set for the show.

Since the show’s finale, there is very little information on the series but entertainment blogs like Carter Matt suggest that the upcoming season will not be as smooth sailing for the Secretary as most people may think. There will be a lot of bumps in the road and this surprise guidance from a real life Secretary of State might just be one of the things that she needs to survive.

Albright will not have to change much as she will portray herself. She will enter the scene more as a mentor giving McCord advice on the job at hand. In real life, she had successfully served the White House under the Bill Clinton administration from 1997 to 2001. Christian Today reported that the story arc will center on Elizabeth’s means of coping with the Capitol Hill politics. Former Secretary Albright will help her make a crucial decision that involves the National Security Advisor Craig Sterling. The said decision may make or break McCord’s alliance with President Conrad Dalton.