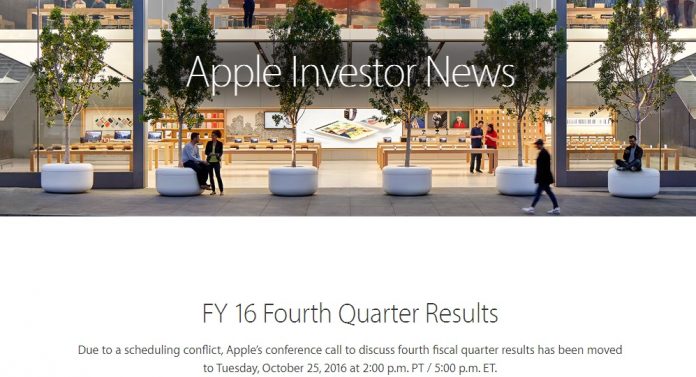 Over a week ago, Apple made an announcement on their website making it known that the once Oct. 27 quarterly financial report to investors has been rescheduled a couple of days earlier due to a so-called schism of schedules. Given Apple’s usually streamlined calendar of events, most tech buffs found this development a bit unusual.

Having said that, many are now coming to a conclusion that the Apple could be up to something and a lot of them are placing their bets that the company might be preparing to launch their other devices, one of which could be the much-awaited MacBook Pro 2016.

It can be recalled that Apple rarely moves their scheduled events unless they feel the need to, in which a notable mention is the passing of their vice president for marketing Bill Campbell earlier this year. The company had to postpone their second quarter report to be able to take part in the board director’s funeral service back in April.

Meanwhile, the aforementioned Oct. 27 date is now considered as the most viable window that Apple could be hosting their next event and if these guesses fit in the bag of what the company is cooking, tech freaks and consumers alike might see an overhauled version of the MacBook Pro donning the highly anticipated OLED touch strip set to replace the physical function keys, as depicted in leaked images.

Another plausible proof that the arrival of a new MacBook Pro is imminent is the previous statement of Rhoda Alexander, director for Tablet and Notebook PCs at IHS Markit Technology, that Apple has already started mass producing the upcoming portable computer that is now expected to be launched later this month.

Aside from the abovementioned OLED touch bar feature, it has also been reported that the notebook will be boasting a 5K screen, a graphics coprocessor from either NVIDIA or AMD, an A10 chipset and the expected macOS Sierra.

Steam sets new record for most concurrent players with 18.5 million