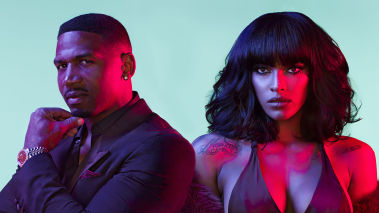 Two stars of VH1’s reality series “Love and Hip Hop: Atlanta” is set to get their own TV show.

According to Yahoo, Stevie J and Joseline Hernandez landed their own spinoff series dubbed “Stevie J & Joseline Go Hollywood” where the notorious couple will show their life as they moved to Hollywood. The narrative is predicted to showcase their ventures and opportunities which include filming a movie as Joseline was teased to be attending an acting class.

They headed to the West Coast from Atlanta to work on their movie titled “That Time of the Month,” but it seems like Joseline may not be getting the lead role as Stevie’s love interest.

“Who else you gonna use? The mannequin? What’s that? What thot can do a better job than the Puerto Rican Princess? An international superstar? As far as I can remember, I’m the leading lady of ‘That Time of the Month.’ You can keep your little [tactics] to yourself,” she said to Stevie during the premiere episode.

When he said that he will be hosting a party with Bad Boy Records and even the movie executives, “Oh so I finally get to meet them?” Hernandez retorted. She also dropped the bomb that she has already acquired a new house.

Moreover, future episodes are expected to feature how they will help Stevie’s children adjust in their new environment in California, attempt to persuade Mimi Faust who Stevie has a child with to relocate near them, and promote their careers in music. There are also claims that the storyline may showcase their alleged marital problems which may have lead to their separation.

Aside from the two headlining the new show, some of the guest appearances include famous friends of the pair such as P. Diddy, Faith Evans, Russell Simmons, K. Michelle, and Laurieann Gibson.

'The Vampire Diaries' season 8 spoilers: romantic relationships will be delivered...