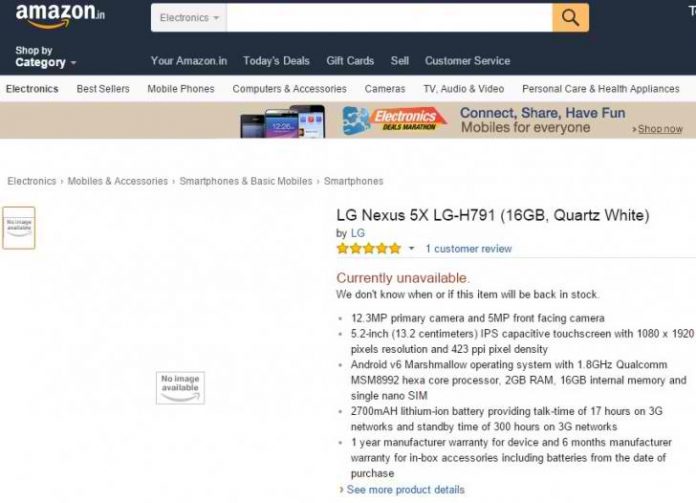 The long string of rumors that surround the LG and Huawei-made Nexus phones may finally be coming to an end, but not before the latest rumors surfaced, as this time the specs of the LG Nexus 5X were revealed in a listing on Amazon India.

The specifications shown were mostly in line with previous rumors, as the listing (which was shortly taken down for some unknown reason) revealed that the LG Nexus 5X 16 GB variant will be having a model number of LG-H791. According to the listing, the LG Nexus 5X runs under a hexa-core Snapdragon 808 processor, and will sport a 5.2-inch wide display with 1080p Full HD resolution, with a 423 ppi pixel density rate.

The LG Nexus 5X will pack 2 GB worth of RAM, along with 16 GB worth of built-in internal storage capacity, and it supports single nano-SIM usage. As for the camera, the listing showed that the LG Nexus 5x will have a 12.3 megapixels rear main camera, coupled with a 5 megapixels front facing camera for selfies and video calling.

Moreover, the device was shown to have Android Marshmallow 6.0 out of the box, just like how it was previously rumored.

Google recently announced a special event that will take place in San Francisco. While no specifics were given, only that it will feature “some tasty new treats and s’more ,” it is widely expected that the tech giant will finally be releasing the new version of their Android operating system as well as the long rumored new Nexus phones form LG and Huawei. The event will happen on Tuesday, September 29 and will begin at 9AM.