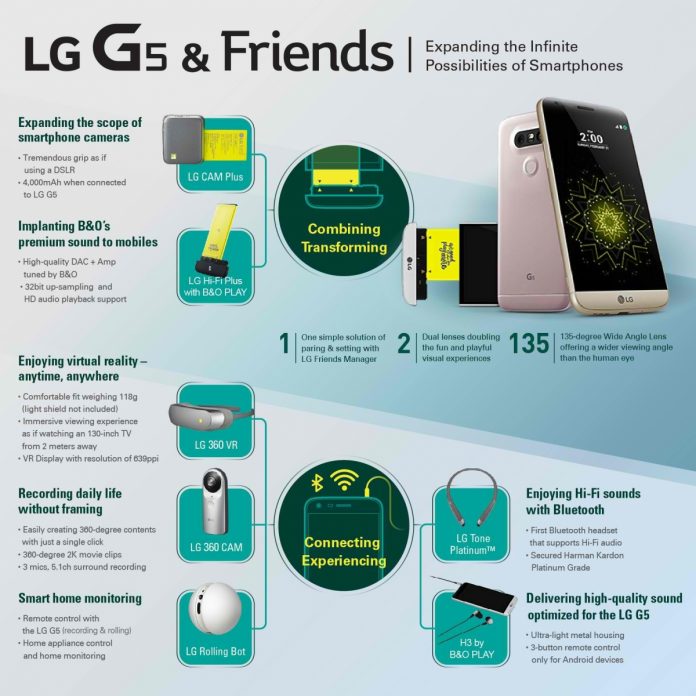 Finally, the new LG G5 flagship smartphone is here. After a string of rumors, speculations, and leaks, the new flagship smartphone is now official, and LG takes pride in introducing it as a smartphone with a Slide-out Battery functionality. It is also a device that falls under the category of being a Modular Type. Through external accessories, the G5 will be able to transform into a wide range of different devices more than just a simple smartphone.

In a press release by the company, the LG G5 was announced to come with a set of eternal accessories that are called LG Friends. They are companion devices that can transform the G5 to a digital camera, a Hi-Fi player, and more.

“The new LG G5 will encourage owners to rediscover the true joy of a mobile life,” said Juno Cho, president and CEO of LG Electronics Mobile Communications Company. “The G5 and LG Friends are the result of many experts inside LG asking themselves if it was still possible to be innovative and unique in the smartphone space. I think once customers spend a little time with the LG G5, their answer will be a resounding yes.”

The 360 VR is a goggle that when worn, will transform the display of the device to a simulated 130-inch TV viewed from two meters away. The 360 CAM will enable users to take 360-degrees angle of content with a 2K resolution and 5.1 surround sound. The LG Rolling Bot is a companion device that rolls like a ball while capturing images and videos.

The Tone Platinum, on the other hand, is a premium headset, and the world’s first Bluetooth headset equipped with aptX HDcodec, for a lossless 24-bit audio experience. H3 by B&O PLAY is a pair of Hi-Fi earphones. The LG Smart Controller can serve as a control device for a drone while streaming live videos to the G5. Lastly, the Friends Manager is the hub application that allows the G5 to connect with LG Friends with minimal fuss and effort.

LG has yet to announce sales and pricing details for the G5 and the LG Friends.