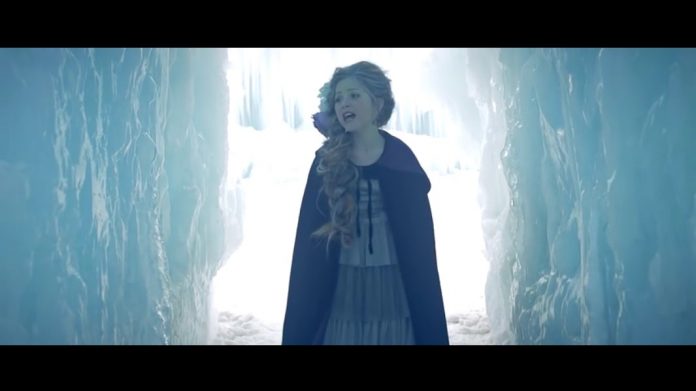 Sony Music Entertainment’s Portrait Records has tapped the talent of YouTube music sensation Lexi Walker for a brand new Christmas album to be released later this month. The 13-year-old singer, whose rendition of “Let It Go” from the film “Frozen” (with Alex Boy) has gone viral on YouTube with roughly 72 million views, is set to belt out six tracks on her debut album simply titled “Merry Christmas.”

According to a press release posted on PR Newswire, the album consists of well-loved holiday songs, namely: “When a Child is Born,” “Christmastime is Here,” “It’s the Most Wonderful Time of the Year,” “O Holy Night,” “Pat A Pan,” and “We Need a Little Christmas.” There is also a bonus track, “Let It Go” featuring Alex Boy.

The upcoming songstress is also set to sing the national anthem at the 49ers vs AZ Cardinals game in San Francisco on Nov. 29, and she will be appearing at the A Kurt Bestor Christmas in Utah from Dec. 10 to 12, and at the Christmas Special AHS on Dec. 19, also in Utah.

While “Merry Christmas” serves as her debut album, Walker is not new to performances. The press release states that she has performed in “America’s Got Talent,” “Good Morning America,” “The Queen Latifah Show,” and “The Couch,” among others. She even opened a benefit concert for the original “Let It Go” singer, Idina Menzel, and earned a finale spot at the Disney Christmas Day Parade. She has likewise experienced being a part of the Christmas for the Troops, has performed at the Radio City Music Hall and at the Carnegie Hall, and led the national anthem at the Real Salt Lake soccer game.

Walker’s “Merry Christmas” will be released on iTunes and Amazon on Nov. 20.