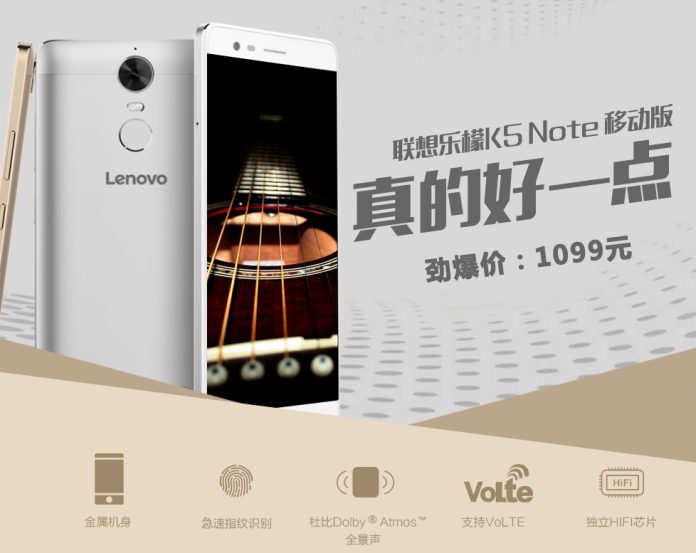 Most companies take a year or twosometime even more than thatto launch successors to their current smartphone or phablet. However, Lenovo did things differently by launching the new K4 note phablet device just a few weeks ago, then immediately launching its successor, the K5 Note.

Lenovo made the new K5 Note official recently via the company’s Chinese website. The company detailed the device’s hardware and software specifications as well as information on the availability of the K4 Note’s successor.

As per Lenovo’s Chinese website, the new K5 note phablet sports the same display as that of the K4 Notea 5.5-inch IPS LTPS. It has a 1080 x 1920 pixels Full HD resolution. The device is powered by a 64-bit Mediatek Helio P10 chipset with an octa-core CPU clocking in at 1.8GHz frequency speed. A Mali T860 GPU handles the device’s graphics for games and video playback.

The new K5 Note phablet packs 2GB worth of RAM along with 16GB worth of built in internal storage capacity with support for external microSD expansion. The device measures 152mm tall, 75.7mm wide, and 8.49mm thick.

As for the camera, the new Lenovo K5 note sports a 13-megapixel main rear camera that is coupled with an 8-megapixels front snapper for selfies and other similar purposes. It comes powered by a non-removable battery of 3,500 mAh capacity, which also supports fast charging technology. The device features a fingerprint sensor, which can be used to secure the phone, make payments wirelessly, and take photos.

For the device’s audio, it features a 1.5-watt rear speaker with Dolby Atmos for better audio quality on the device. It is priced at 1,099 Yuan and will sell via a flash sale sometime around this week.

'Need for Speed' news: EA Access to title for Xbox One...