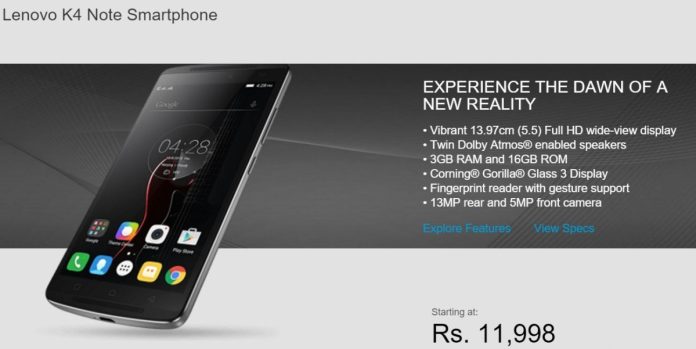 The handset comes with a 5.5-inch Full HD display with 19201080 resolution at 441 pixels per inch. It is powered by a 64-bit octa-core MediaTek MT 6753 processor, along with a Mali T720 for its graphics. It also comes with 3GB of RAM and an internal storage of 16GB, which has a leeway for external expansion through microSD slot of up to 128GB.

Although the camera features generally remained the same in most features, the device comes with numerous improvements at a still friendly price. Its front camera still is 5 megapixels and 13 megapixels with dual tone LED flash, along with the addition of the phase detection auto-focus feature, for its main snapper.

In addition, the Lenovo K4 Note comes with a bigger battery at 3,300 mAh compared to its predecessor and a more up-to-date operating system at Android 5.1 with Vibe User Interface out of the box. It also comes with a Corning Gorilla Glass 3 for protection and a fingerprint scanner at the back.

Aside from these, the Lenovo K4 Note comes with a better sound feature with TheatreMax, which has the capability to convert multimedia contents into virtual reality or an “immersive large screen experience boasting smooth graphics, life-like surround sound and responsive 3D gameplay,” said the company as noted by BGR.

For users who want to take advantage of the enhanced experience, Lenovo also has a new virtual reality headset that can be used along with K4 Note. Referred to as the ANT VR, users can use their device with the headset with orders starting on Jan. 19.

Cost-wise, the device can be bought standalone at around $178 or bundled along with the VR headset at $187. ANT VR is also sold separately at $19.