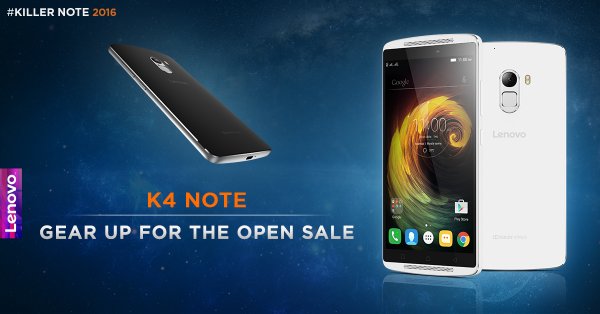 Lenovo recently announced that they will be conducting open sales for their K4 Note smartphone in India starting Feb. 15. The mobile company will also introduce, along with the opening of the free selling system for the device, a new color for the K4 Note.

Last month, Lenovo released the K4 Note. However, the device was released as an Amazon India exclusive and under an invite-only/registration based purchase system. The smartphone was available on Amazon India via frequent flash sales only.

Now, the phone will be sold free from any time restrictions. As announced by Lenovo India over their official Twitter account, the Lenovo K4 Note will start its open sales system in the country on Feb. 18. This is attributed to the company’s claim of 1.1 million users who have registered for the device in the past and for the amount of units sold throughout the flash sales on Amazon India, which is said to be over 180,000 units.

Additionally, the K4 Note will have a new color – Pearl White. The device was only available in black in the past.

To recall the specs, the Lenovo K4 Note smartphone sports a 5.5-inch IPS display with 1080p Full HD resolution and Corning Gorilla Glass 3 protection. It runs under a Mediatek MT6753 chipset with an octa-core CPU clocking in at 1.3 GHz speed. It packs 3GB RAM along with 16 GB worth of built-in internal storage. It boots on Android Lollipop 5.1 and is powered by a 3,300 mAh battery.

Android Lollipop 5.1.1 updates: manually update your Nexus device with these...