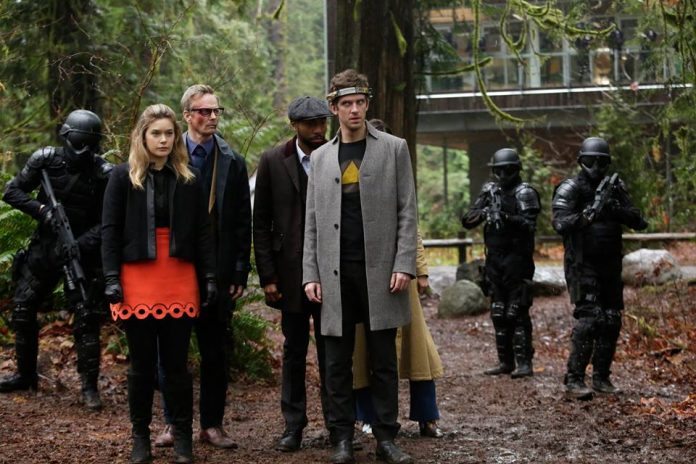 The sci-fi psychological thriller series “Legion” has concluded its first season with a mind-boggling cliffhanger.

The season finale failed to wipe out Farouk, the Shadow King, but the demon was, at least, out of David’s (Dan Stevens) mind.

In the eighth episode, David was already in control of his paranormal powers. Unfortunately, Farouk still parasitized the mutant’s head, which led him to have schizophrenic attacks.

While watching David (Dan Stevens) suffering from the anti-parasite procedure, Syd (Rachel Keller) made a risky move. She kissed David, which unleashed the Shadow King and transferred to Kerry (Amber Midthunder), then, to Oliver (Jemaine Clement), Melanie’s (Jean Smart) husband.

Lenny (Aubrey Plaza), who was first possessed by Farouk, looked refreshed. However, Oliver drove away from Summerland with Farouk trapped in his body.

In the post-credit scene, David and Syd were on the balcony of the mutant facility when a floating sphere appeared and scanned David. Immediately after being recognized, David got absorbed into the sphere, and he was taken away.

It looks like the pressure is unto David as the second season of the Marvel Comics series opens. The young mutant, who, for the first time in his life, is freed from his long-time nemesis, would not have any time to relax.

“He’s not going to have that luxury, because he’s on to the next crisis. I think that’s going to continue to keep the pressure on him. That stress on someone who is disjointed can be very destructive,” series creator Noah Hawley revealed to The Hollywood Reporter.

“It’s the beginning of another thought. I wanted to give people the end song and the feeling of watching the credits, to let them absorb the complete story they just watched. And then I wanted to tease them as to what chapter two is going to be,” Hawley stated, explaining the post-credits sequence.

Hawley, who also created the highly rated show “Fargo,” intended to release the upcoming season on the same airdate as its predecessor.

He stated that his schedule is currently tied up with his other show, which is now in its third season. The Ewan McGregor-led series is premiering this Apr. 19 on FX.