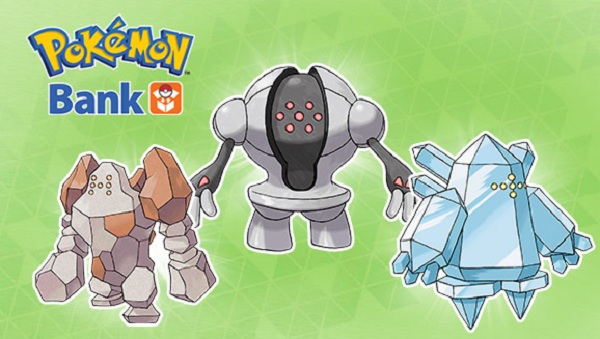 Pokemon fans who are also subscribers of Pokemon Bank have a chance to receive three legendary Pokemon – Regirock, Regice, and Registeel – for a limited time. In addition, the mythical Pokemon Celebi is also available for players this month.

Nintendo and The Pokemon Company International are currently making Regirock, Regice, and Registeel available to players of “Pokemon X,” “Pokemon Y,” “Pokemon Omega Ruby,” and “Pokemon Alpha Sapphire.” The limited time promotion is valid for players with a Pokemon Bank account. The three legendary Pokemons will each be level 50 and will possess a Hidden Ability.

Players need to access their Pokemon Bank account and use the Pokemon Link in their game to receive these legendary Pokemon. Regirock, Regice, and Registeel can only be downloaded once per account until October 31.

The Pokemon Bank is a paid service used by players of the abovementioned games to deposit, store, and manage their Pokemon in 100 private Boxes. Each box holds 30 Pokemon each, which gives players the option to store up to 3,000 Pokemons online. The service is useful for transferring Pokemon from one game to another, with some exceptions. Availing of this service costs $4.99 per year.

In addition to these three legendary Pokemon, Nintendo and The Pokemon Company are also making the mythical Pokemon Celebi available for a limited time this month. Players of “Pokemon Omega Ruby,” “Pokemon Alpha Sapphire,” “Pokemon X,” and “Pokemon Y” can download Celebi as a Mystery Gift until March 24.

Celebi is the second mythical Pokemon that the two companies are giving away for free for the entire year in celebration of the franchise’s 20th anniversary. The mythical Pokemon giveaway started with Mew last month. In April, players will have a chance to receive Jirachi, Darkrai in May, Manaphy in June, among others. More details can be found on the Mythical Pokemon event page.