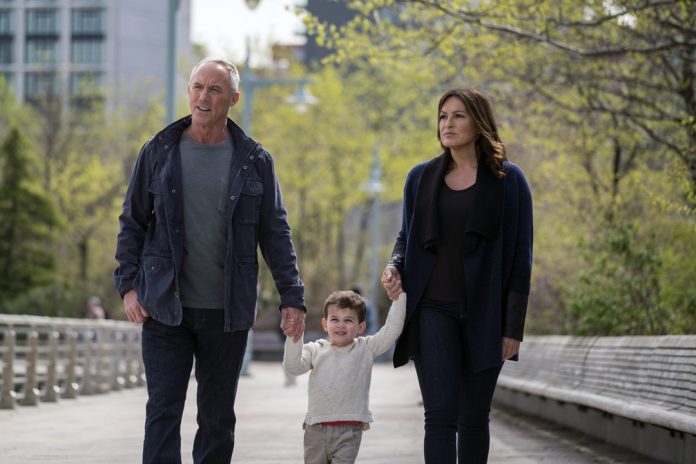 Somehow, in the middle of a very hyped up premiere episode, “Law & Order: Special Victims Unit” was still able to sneak in a nugget that could potentially lead Mariska Hargitay’s Olivia Benson to the altar.

Just before last week’s season premiere titled “Terrorized” drew to a close, Benson and current boyfriend Robert John Burke’s Ed Tucker had a brief but meaningful conversation. After tackling a much-publicized case that put her at odds with Ral Esparza’s Assistant District Attorney Rafael Barba, the seasoned officer got some downtime with son, Noah (Jack Nawada-Braunwart), and her beau at the park. Benson suddenly became teary-eyed admitting that while she was happy, she was also afraid that the quality of life that she is living will eventually be stripped away from her. Tucker then cajoled her and technically pledged to keep her happy. The scene did not blatantly talk about getting hitched, but the idea was implied with the two staring at each other meaningfully.

In the series’ defense, it has been 18 years and the now Manhattan lieutenant has never gotten close to being engaged despite frolicking with numerous men in the storied franchise. But setting up Tucker to be Benson’s eventual life partner could also round up the series as the character has been lurking around the police procedural since its earlier seasons.

Since the whirlwind affair of the two was made public last season, a divisive reaction from fans took over the comments section of “SVU.” Some adamantly reasoned that the reveal did not make sense and regardless of being a recurring character, Tucker was not really that visible in the show. Add the fact that his history with the SVU hasn’t really been that good since he almost cost Benson her job once. Furthermore, the budding romance was not even hinted at until it was ultimately confirmed.

On the other hand, those who have been with Benson since the show premiered in 1999 are still hopelessly wishing that somehow, the veteran officer will end up with Christopher Meloni’s Elliot Stabler. The two have arguably been the pioneer of the Dick Wolf-created series until Meloni’s abrupt departure after season 12. Since then, viewers have been steadily campaigning for his return.

Benson and Stabler’s chemistry has always been off the charts, despite the former already being married and having kids. Part of the fascination on their supposed relationship is the lack of any acknowledgment of their real status. Although, it was insinuated multiple times that there might have been something more to them than just being work partners and good colleagues.

Looking forward, Benson eventually walking down the aisle with Tucker waiting for her at the altar will still be a good thing for her. It is no secret that over the years, she has had some questionable affiliations with men who seemed to need her more than being a support system for her. However, the Internal Affairs Bureau captain has provided a good foundation for her if she does settle down with him.

Moving on to this week’s episode dubbed “Making A Rapist,” Ice-T’s Fin will be put in the spotlight as the squad revisits an old case. The theme will be similar to Netflix’s “Making A Murderer.”