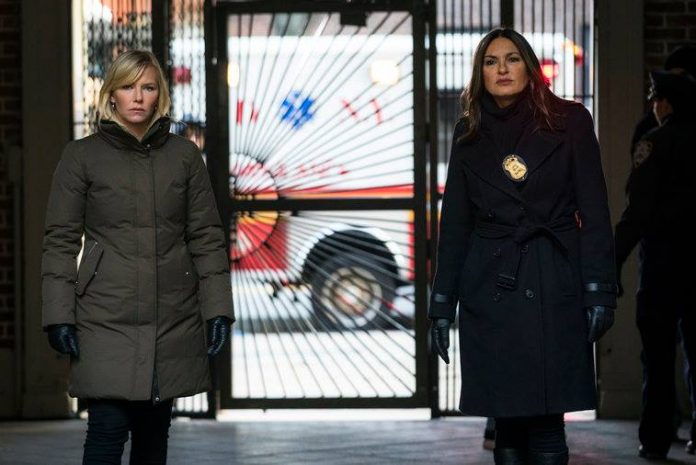 “Law & Order: Special Victims Unit” season 18 appears to be doing a roll call for its cast members as following an episode focused on Fin (Ice-T) two weeks ago, Amanda Rollins (Kelli Giddish) will step up to the plate with a plot arc of her own.

The installment titled “Heightened Emotions” reunites the Manhattan detective with her sister, Kim (guest star Lindsey Pulsipher) after she is released from prison via parole. This major character development will be coupled with the case of the week which involves an athlete who is subjected to sexual assault. Unfortunately, like every “SVU” narrative, things are not exactly how it looks like from the surface.

Complicating things for the victim is her safely guarded double life which could eventually backfire on her and her chances of winning the case against her attacker. The promo clip for the episode divulges that the aspiring Olympian also does prostitution on the side as stated by Sonny Carisi (Peter Scanavino).

The Dick Wolf-created police procedural continues to delve into familial ties with Rollins’ sister and it will be interesting how things will pan out between a police officer and a former convict. The character was previously featured in season 14 after she manipulated the situation causing a woman to be raped. However, jail time seemed to agree with her and her disturbed mental state as she received pardon and early release following a convincing plea.

It can be remembered that Olivia Benson (Mariska Hargitay) had the same predicament a couple of seasons ago with the recurring theme involving a stepbrother named Simon (Michael Weston) that she initially never heard of. The story was revisited sometime later when he needed help from the then Manhattan detective after he was being pressed about openly carrying a joint in New York.

Despite somehow relating to Amanda’s seemingly soft spot for her unstable sister, Benson warns her subordinate of taking away her shield if she every tries to cover for Kim again as seen in The Hollywood Reporter‘s exclusive sneak peek for the episode. However, in a separate clip, it seems that while Amanda is still suspicious of Kim, she still lets her in her apartment and even takes care of her baby daughter.