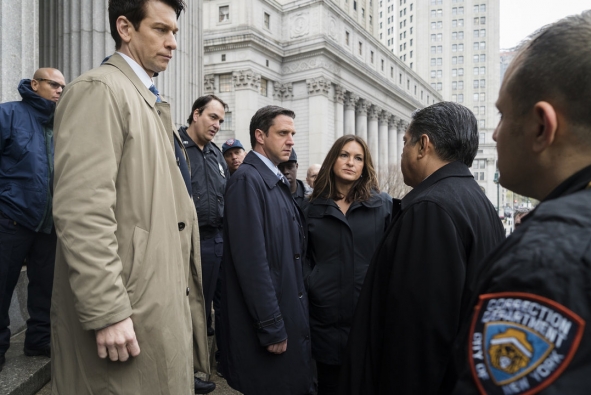 Dubbed to be an emotional roller coaster, the upcoming season finale for “Law and Order: SVU” airing this week is already generating buzz over the tiny sneak peeks that the show has provided its fans.

The chapter-ender will carry over the case at hand involving a penitentiary officer, Gary Munson (Brad Garrett) that has been accused of sexually harassing some of her inmates. It does not help that Munson exudes a calm demeanor which prompts the union to totally back him up and even goes to greater lengths such as sending threats to ADA Barba (Raul Esparza). Aside from Esparza, Dodds (Andy Karl) is also caught in a dangerous situation as the teaser trailer saw him being shot by Munson close range.

Meanwhile, as this season of the longest-running procedural comes to a close, some fans are already looking forward to what they can expect next on “SVU.” The show’s long history was able to build a growing community among loyalists of the Dick Wolf-created drama. And while Benson (Mariska Hargitay) remains to be the core of the show, it is no secret that her former partner, Elliot Stabler (Chris Meloni) has also been a huge part of “SVU’s” success.

Meloni’s abrupt departure years ago dismayed a lot of fans and even though it seemed that the actor was no longer interested in stepping back at the Manhattan office, fans are keeping their hopes up for his eventual return.

Meloni was once again asked about the possibility of coming back into the “SVU” fold while promoting “Underground” and he candidly revealed that he is willing to do some episodes.

“I just recently was talking about that. [Pause] I always presented that I’d be open to doing the last few episodes, so that’s really all I have to say about that. It’s not up to me, I’ll just say that. I’ve said my peace on it,” he told Entertainment Weekly (via Carter Matt)

While it may not be happening right away, Meloni’s statement arguably elicits excitement from “SVU” fans. It will be interesting how Benson and Stabler’s chemistry will be after the former has already a growing family of her own. It can be remembered that when Tucker (Robert John Burke) was revealed to be Benson’s secret man, it draw mixed reactions from fans.