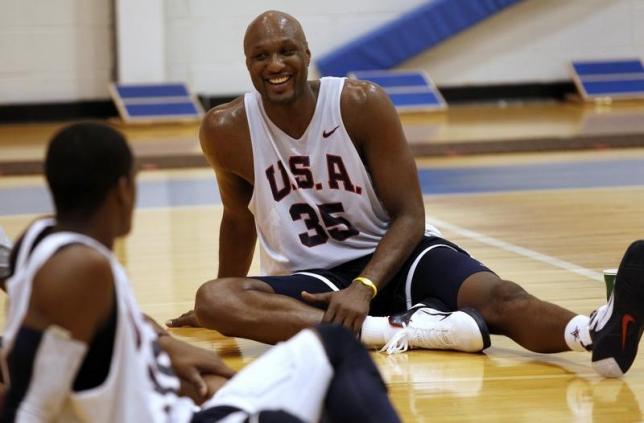 Lamar Odom has already been released from the hospital and is inspiring his brother-in-law Rob Kardashian to take care of his health.

A source told Hollywood Life that Odom, 35, who lives in a house near his ex-wife Khloe Kardashian, is frequently visited by Rob, 28, who has been struggling with health issues and depression.

“Rob was so saddened by Lamar’s situation that he felt the urge to get on the path to health,” the source revealed. “Life is very fragile and seeing Lamar in that condition reminded Rob that health is precious.”

“Lamar told Rob to take better care of himself especially now that he has diabetes and Rob listened,” the source continued.

The NBA player was rushed to the hospital on Oct. 13 after he was found unconscious in a Nevada brothel. Odom was released from Cedars-Sinai Medical Center a few weeks ago and is still undergoing therapy in his home and in a facility.

“He still needs help walking,” a source told People Magazine. “He can move around alone, and he can communicate much better. In the beginning, he couldn’t talk at all.”

“The therapy can be incredibly frustrating and he has hard moments,” the source continued. “But Lamar is a former athlete. He’s strong. And he really wants to get better.”

Although Odom still isn’t back to normal, the insider said he has done much progress since the overdose.

Khloe, 31, has been by her ex-husband’s side all throughout his battle. In her sister Kourtney’s interview in “The Ellen Show,” the “Kocktails with Khloe” host shared that Odom is doing great and spends time hanging out with Kourtney and Kim’s children.

Khloe added that Odom is finally ready to find out what happened to him unlike before. He asks Khloe what he really got into every day which she then feels delighted to answer.

'The Witcher 3' DLC release date, rumors; may include new location,...