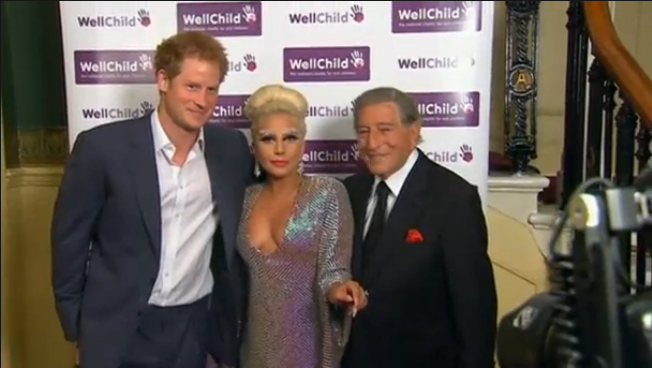 The Mother Monster Lady Gaga has recently been introduced to the United Kingdom’s fifth in line to the throne, Prince Harry, as she performed in a benefit concert with Tony Bennett at the Royal Albert Hall, last Monday night.

The concert was in aid of WellChild, an organization which is committed to help children who have serious medical conditions to have the best possible quality of care and to which Prince Harry is a patron of since 2007.

In a report by the Daily Mail, Lady Gaga was wearing a plunging sequined dress with matching diamond eyebrows as she posed for pictures with the prince and fellow crooner, Bennett. As Prince Harry thanked her for supporting the charity, the pop artist said, “We think you are fantastic,” and offered to meet with the children helped by the organization the following day, as they could not attend because of the concert’s late start time.

Bennett also reportedly mentioned to Prince Harry that he was a good friend of his mother, the late Princess Diana and did many benefits with her, to which Harry replied with, “That’s fantastic,” the report shared.

In a press release, the charity’s Chief Executive Colin Dyer has mentioned that, “The proceeds will be a massive boost to our work to support seriously ill children and their families across the UK.” He expressed his gratitude for the two singers in supporting their charity through the concert. E! Online reports that the concert has raised more than 100,000 ($153,435) for WellChild.

Meanwhile, Dyer told People the importance of the prince’s involvement, “Most of our work centers around the family. The most important thing he gives to us is that time spent listening and understanding the situation the families find themselves in. That is not always easy for people to do when faced with a sick child,” he said.

Lady Gaga and Tony Bennett are currently on tour for their Grammy-award winning jazz album, “Cheek to Cheek.”