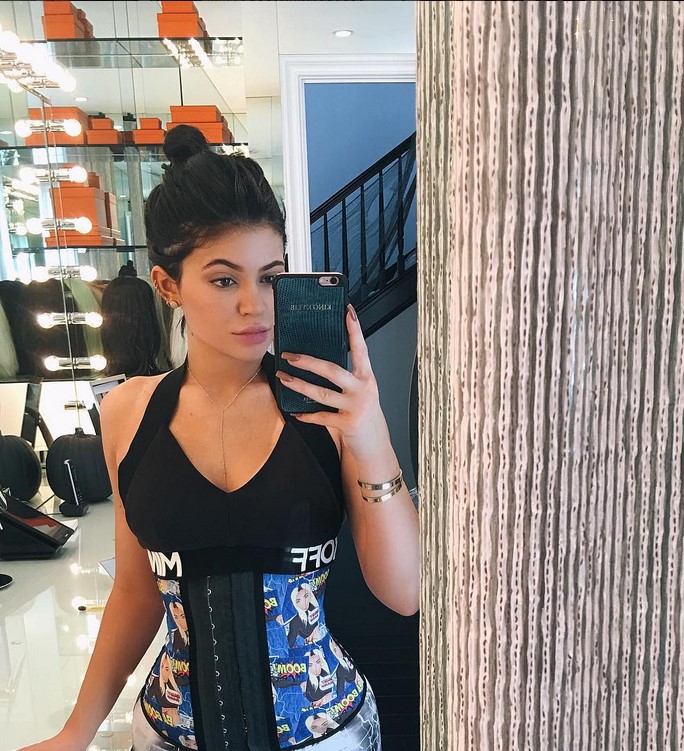 Kylie Jenner has followed her sisters’ footsteps and is now into waist training. Started by her older sister Kim Kardashian-West, the 18-year-old shared a photo of herself wearing a waist trainer on her Instagram account.

According to the photo, Kylie wore the blue waist trainer while taking her dogs out for a walk. Admitting that there is nothing wrong with “a little extra help,” the reality star got her equipment from Waist Gang Society. The photo has already earned more than 1 million likes and more than 39,000 comments.

Waist training, based on the company’s website, shaves inches off women’s waists for better curves. PreMadonna, owner of the Waist Gang Society, said that she was inspired by the tight-laced corsets used during the Victorian ages. As her business grew on Instagram, Kim got in touch with her through a mutual friend. Since then, the television personality has been using her product all the time.

It’s no surprise that Kylie has jumped on what her older is doing. Back in September, the sisters posted a video on Kylie’s website where they talked about Kim getting dethroned by Kylie. “I mean honey, let’s be real you got to put in a few years before you actually dethrone me. But I want to pass on the baton to you. Who better to pass on the knowledge to? You guys I give her all the tricks. She is so like deserving. If I want to share my clothes, my tips, my glam squad it is to King Kylie,” the older sister said.

Meanwhile, during Kim’s camp-inspired baby shower for her second baby, Kylie and her other sisters all wore coordinated striped pajamas. On her Instagram, she captioned one of the photos, “just our usual morning routine #troopbeverlyhills #sipstea” and the other “Baby shower vibes.” Both photos already got more than 2 million likes on the photo sharing site.

'The 100' season 3 spoilers: Will Lexa be reincarnated?