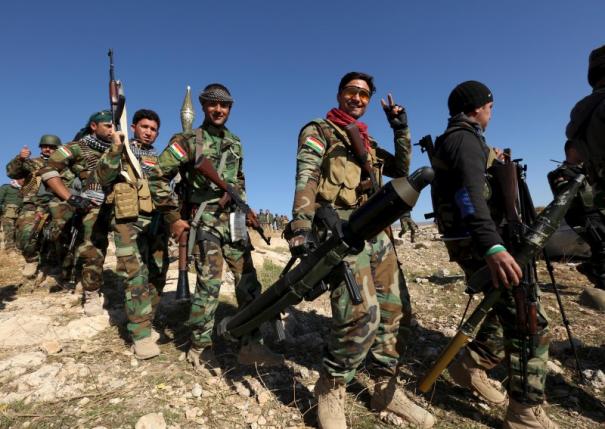 Kurdish forces backed by U.S. air strikes seized the northern Iraqi town of Sinjar from Islamic State on Friday, a Reuters witness said, in one of the most significant counter-attacks since the militants swept through the north last year.

“ISIL defeated and on the run,” the Kurdistan regional security council said in a tweet, using an acronym for Islamic State. It said Kurdish peshmerga forces, which led the operation, had secured Sinjar’s wheat silo, cement factory, hospital and several other public buildings.

Sinjar is home to Iraq’s Yazidi minority who suffered at the hands of Islamic State when it overran the area in August 2014, systematically slaughtering, enslaving and raping thousands.

Iraqi Kurdish regional President Massoud Barzani also declared victory in an offensive that could provide critical momentum in efforts to capture the western provincial capital Ramadi, and Mosul in the north, an Islamic State bastion.

“The liberation of Sinjar will have a big impact on liberating Mosul,” Barzani, who personally oversaw the offensive, said atop Mount Sinjar, overlooking the town.

The recapture of Sinjar from Islamic State came as evidence grew that the group had suffered another setback with the probable death in an air strike in northern Syria of Jihadi John, a Briton who had appeared in videos showing the beheadings of American and British hostages.

In the Sinjar area itself, the operation severed vital supply routes used by Islamic State to move fighters, weapons and oil and other illicit commodities that provide funding for its self-proclaimed caliphate.

Civilians appeared to have fled the town before the operation began. But it was still not clear if most Islamic State militants had carried out a tactical withdrawal.

Peshmerga forces and fighters affiliated with the Kurdistan Workers’ Party (PKK), both of which include Yazidis, entered Sinjar on Friday after cutting it off from east and west.

The Kurdistan council said peshmerga forces had entered Sinjar “from all directions” to begin clearing remaining insurgents. A Reuters correspondent saw hundreds of peshmerga fighters walking into the town and along a main road without facing immediate resistance.

Kurdish commanders expressed concerns that some insurgents were hiding and would blow themselves up as the peshmerga advanced.

The number of Islamic State fighters in the town had risen to nearly 600 in the run-up to the offensive, but only a handful were left in Sinjar on Friday, said Brigadier General Seme Mala Mohammed of the peshmerga.

Islamic State, made up of Iraqis, other Arabs and foreign fighters, poses the biggest security threat to OPEC oil producer Iraq since a U.S.-led invasion toppled Saddam Hussein in 2003.

Campaigns to contain Islamic State have moved slowly in Iraq, where sectarian divisions and corruption have hindered military progress.

Kurdish forces took up positions along Highway 47, which is a strategic route between Raqqa in Syria and the Iraqi city of Mosul – the main Islamic State bastions.

Kurdish commanders says they will need to advance slowly to avoid explosives likely planted by Islamic State on roads and in buildings in Sinjar. The Kurds have some of the most experienced forces in Iraq, where they fought Saddam’s security forces for decades.

President Barack Obama said he was focusing on shrinking and constraining Islamic State in Syria and Iraq but acknowledged that problems with the group would continue until the Middle East stabilizes.

Elsewhere in the region, at least 43 people were killed and more than 240 wounded on Thursday in two suicide bomb blasts claimed by Islamic State in Beirut’s southern suburbs, a stronghold of the Shi’ite Muslim group Hezbollah.

The explosions were the first attacks in more than a year to target a Hezbollah area in Lebanon, and came as the group is stepping up its involvement in the Syrian civil war.

Iraqi government forces have struggled to build momentum in pushing back Islamic State since its lightning sweep through the north last year added to gains in the vast Sunni heartland Anbar province in the west.

The Kurds and Shi’ite militias are seen as critical forces in the fight against the insurgents, who control a third of Iraq and large parts of neighboring Syria.

Sinjar is a symbolic as well as strategic prize. Washington launched an air offensive in Iraq and neighboring Syria last summer after Islamic State’s killing and enslaving of thousands of Sinjar’s Yazidi residents focused international attention on the group’s violent campaign to impose its ideology.

“On this day I announce to the people of Kurdistan the liberation of Sinjar,” said Barzani through microphones placed on a wall of sandbags, with Sinjar in the distance.

“We promised and we keep our promises: we proved to our Yazidi brothers and sisters that all Kurdistan is behind them. Today we took revenge for every Yazidi.”

Barzani also heads the Kurdistan Democratic Party (KDP), which is accused of seeking to monopolize power by other groups arrayed against Islamic State.

Many Yazidis lost faith in the KDP when its forces failed to protect them from Islamic State’s attack on Sinjar.

A Syrian affiliate of the PKK came to the rescue, evacuating thousands of Yazidis stranded on Sinjar mountain and establishing a permanent base there.

U.S. military advisers were with Kurdish commanders near Sinjar mountain but positioned well back from the fighting, a U.S. military spokesman said.

Around 7,500 Kurdish special forces, peshmerga and Yazidi fighters joined the fight for Sinjar.

For Yazidis taking part, the battle is very much about retribution for Islamic State’s violence against their religious community, which the militants consider devil worshippers.

Most Yazidis have been displaced to camps in the Kurdistan region; several thousand remain in Islamic State captivity.

Yazidis of all ages came to take part in the battle, some returning from abroad. A few men were more than 70 years old, and a commander said he had turned away a boy of 17.

Avdel Khalaf Assaf, a 65-year-old man with a long gray beard, had volunteered to fight.

“Even those who don’t have weapons should come and bring a stick to beat the enemy,” he said.