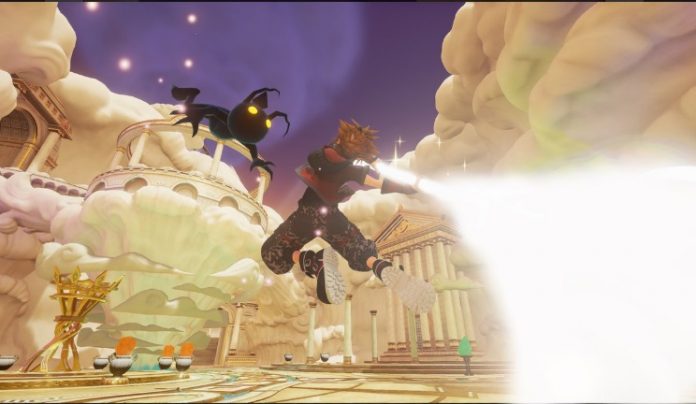 Square Enix has remained quiet for the longest time about the release of the next major installment in the “Kingdom Hearts” saga, “Kingdom Hearts 3.” It is said that the company will be releasing juicy updates about the much-awaited title after they dish out “Kingdom Heart 3’s” precursor dubbed as “Kingdom Hearts HD 2.8 Final Chapter Prologue.”

The famed game developer is pretty much aware that fans of the title are longing to hear an update or two regarding the sequel. As such, Square Enix recently posted on Twitter two in-game photos that made fans delighted and expectant of what’s to come when the title is released.

As per the recent social media post, one of the images depicts the protagonist Sora holding onto a round shield. Game director Tetsuya Nomura said that it is the latest addition to the roster of the character’s Drive Forms and is called the Guard Form. Moreover, the new defense item was derived from Hercules’ world, as it was featured in the said tweet.

Another Drive Form that was unveiled recently shows the protagonist holding a gigantic weapon that’s about to squash a Heartless. From the stance of Sora in the released image, it suggests that the character could be holding an oversized hammer that comes from a yet to be revealed world. It was further stated that Square Enix is working on the undisclosed world which will eventually be added into the game.

Meanwhile, it was noted previously that the game maker has affirmed that Disney-owned franchises such as “Big Hero 6” and “Tangled” will be part of the anticipated title.

Fans continue to wait for more “Kingdom Hearts 3” news and updates. Stay tuned as more details are expected to be revealed in January 2017.