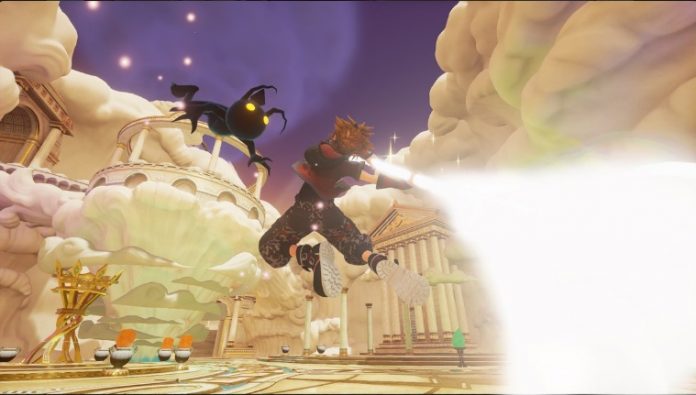 As Square Enix is gearing up to release “Kingdom Hearts 2.8 Final Chapter Prologue,” the game developer is staying mum about the highly anticipated “Kingdom Hearts 3.” It is believed that the lack of news about KH3 is due to Square Enix’s efforts to bring gamers’ attention to KH2.8, but now, two new screenshots from the third main installment have been released, revealing a setting for the game and giving fans a sneak peek at a new Drive Form.

The screenshots were released on the official “Kingdom Hearts” Twitter account, and the first photo was captioned, “As we don’t have any news for #KHIII, Nomura-san would like to offer everyone a sneak peek at Guard Form a new Drive Form!”

The picture’s background appears to depict the world of the Greek gods, and based on the cloud pillars, lightning bolts, and classical Greek structures, it was speculated that the game will feature Mt. Olympus as one of the settings in the upcoming title.

As for the new Drive Form, game protagonist Sora is seen brandishing a shield which protects him from a lightning bolt. Drive Forms are activated special abilities that give Sora a new outfit and added abilities. The new form shown in the photo is called a Guard Form.

The game’s Twitter account added, “The Guard Form shield mentioned earlier was transformed from the Keyblade of Herc’s Shield which has been shown previously.”

It was also revealed on the microblogging site that the power form was edited as “it is the Keyblade from a world that hasn’t been released yet, so it has been changed into a hammer shape.” According to GamesRadar, the Keyblade is connected to a yet-to-be-revealed world, but no other clues were given about it.

Meanwhile, those who can’t wait to play KH3 will do well to play KH2.8 first, as game director Tetsuya Nomura said that people will enjoy the upcoming game more if they give the latter a whirl.

'Rick and Morty' season 3 spoilers: New season rumored to be...