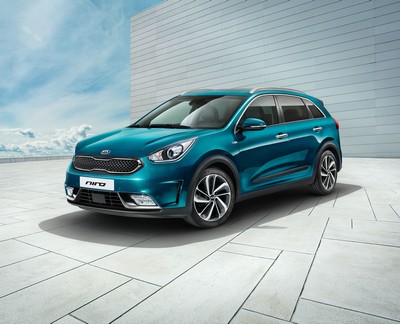 Kia is now a manufacturer of subcompact crossover bandwagons as they unveiled their first ever dedicated hybrid called Kia Niro  during the recent Chicago Auto Show 2016.

The company labeled the model as a Hybrid Utility Vehicle, a crossover between THE Kia Soul and Kia Sportage, and will be part of the EcoDynamics line alongside Soul EV and Optima Hybrid. It has been designed from the ground up with gasoline-electric power.

In the official press release, Kia revealed that their engineers are targeting the dedicated hybrid powertrain to have 89 g/km CO2 emissions and high fuel efficiency. The all-new platform has been created in isolation from other models with the intention to accommodate specific of environmentally-conscious technologies.

It has been noted that the next generation powertrain composed of Kappa 1.6 liter gasoline direct injection engine, lithium-ion polymer battery pack, 32 kW electric motor and six-speed double-clutch transmission, is still under development. The combination is expected to produce a total output of 146hp and 264Nm of torque while the full consumption is a combined cycle of 4.7 liters per 100km.

The styling of the car was led by the company’s design centers in California in partnership with those in Namyang, Korea. The aesthetics features aerodynamic, athletic stance, and subtly sculptured surfaces with sharp, modern lines and signature tiger-nose grille with wide C-pillar.

It is said that the body has a low drag coefficient of only 0.29 Cd which makes it more aerodynamic than competitors while its long wheelbase of 2700mm, short front of 870mm and rear overhangs of 785mm allows for spacious interior. It is also equipped with Advanced High Strength Steel for a lightweight and durable structure.

Inside the cabin, the dashboard features instrument binnacle and human-machine interface system with infotainment options such as Kia Connected Services and Android Auto. There is also controls for heating, ventilation and key driver assistive systems.

Chief Operating Officer of Kia Motors Europe Michael Cole shared, “The Kia Niro will offer buyers a compelling blend of crossover practicality with the cool, modern styling for which Kia is famous, and an efficient new hybrid powertrain to keep running costs down. The Niro fills a gap in the market for a crossover with typically low hybrid emissions.

“The Niro will allow Kia to meet this growing demand for alternatively-fuelled vehicles, and help us meet our 2020 global target to improve average fleet fuel efficiency by 25 percent over 2014 levels,” he added.

The Kia Niro will debut in Europe on March 1 during the Geneva Auto Show, with the production starting in May in a state-of-the-art manufacturing facility in Hwasung, Korea. It will be on sale in Europe towards the end of the third quarter this year.