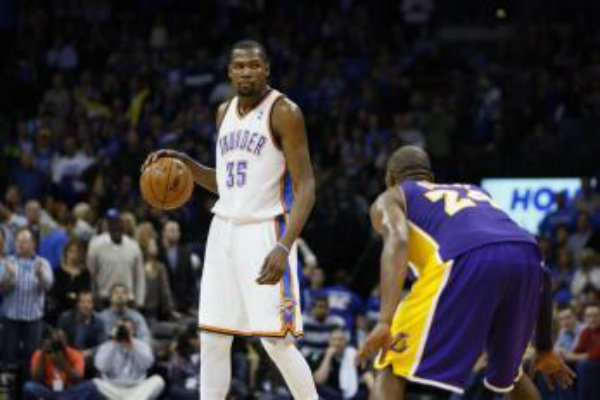 Kevin Durant of the Oklahoma City Thunder and his impending free agency in the summer of 2016 has been the main buzz for the upcoming trade scenario.

The 27-year-old small forward has reportedly taken into account his options as his season for the Thunder is about to wrap up. According to league executives via ESPN, the New York Knicks is one of the teams that will take a crack on opening their basketball shop to reel in the 2007 NBA 2nd overall draft pick.

The Knicks, despite a hundred-to-one chance of acquiring Durant, are reportedly hopeful that franchise player Carmelo Anthony and head coach Derek Fisher would be key elements that the former would consider if talks arise. Both Anthony and Fisher have close ties to Durant.

Durant also gave a pat on the back to rising rookie sensation Kristaps Porzingis. In a report from Sports Illustrated, prior to the Tuesday match-up of the Thunder and the Knicks, Durant called the 7-foot-3 Latvian a “basketball unicorn” due to his multifaceted basketball skills. The Thunder, however, overpowered the Knicks with Durant clinching a season-high 44 points and 14 rebounds in a 128-122 overtime win.

To further bounce forward this free-agency rumor in favor of the Knicks, Durant mentioned in his interview with the New York Post:

“I spent some nice time up here playing basketball in New York City. Some of the most memorable times in my life was coming up here, playing outside, just getting the pure love of the game up here.

“I remember that, always going to remember that the rest of my life and tell my kids about that when I get older.”

On the other hand, Basketball Insiders managing editor Alex Kennedy mentioned that the Washington Wizards’ hotrod point guard John Wall has also made his presence felt in Durant’s free-agency. Durant was born in Washington, D.C. and, as Kennedy disputed, will most likely team-up with the Wizards’ dynamic back-court.