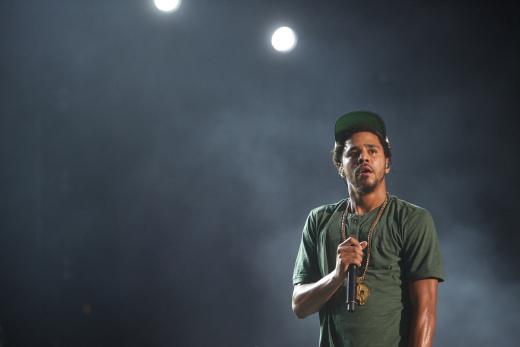 The ongoing radioactive silence with regard to the supposed collaboration album between Kendrick Lamar and J. Cole continues. Unfortunately, it seems like it will continue to do so in the foreseeable future as J. Cole has been receiving immense popularity on his own and would presumably want to capitalize on that.

The American rapper has had a steady stream of hip hop hits and is slowly marketing himself beyond borders. Just recently, he headlined an event in South Africa where over 14,000 people were reported to be in attendance. He was joined by local rappers Nasty C, Kwesta, and Emtee, which was sponsored by South African beer brand, Castle Light. Because of the sold out venue a testament to J. Cole’s transcending reach, the organizers of the said occasion were thrilled and shared that they even had make changes due to the high demand.

“I think the demand was really overwhelming for the fact that we had to re-release tickets and open up an entire new floor,” Ramona Kayembe, Castle Lite Brand Manager told Eyewitness News. “That meant there was a real demand for the experience and for this particular artist.”

Back in his home ground, the 31-year-old musician also has some notable supporters, including President Barack Obama. Earlier this year, the president delivered a keynote speech during the South by SouthWest (SXSW) festival in Texas where he proudly said, “I love J. Cole. You know, this is the benefit of having teenage daughters: I actually keep up. I got a chance to see J. Cole’s mom and grandma.”

Contrary to J. Cole’s unassuming rise to fame, Lamar, on the other hand, is facing raps for copyright infringement. He is being sued for his unauthorized use of the 1975 song “Don’t You Want To Stay” in his track “I Do This.” Aside from the lawsuit, he has just also signed up a new deal with Reebok to design his own version of the “Classic Leather” sneaker silhouette.

Speculations on the joint release from the two iconic rappers started popping back in 2011 when they were snapped together in a recording studio. Since then numerous rumors have followed with the scarcity of any official update to the dismay of fans.