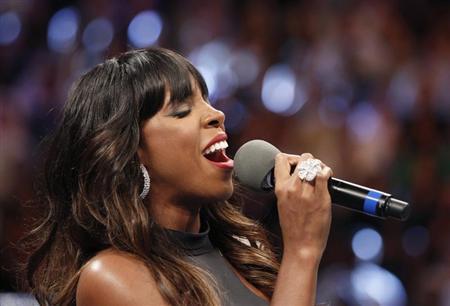 After 18 years in the music business and several stints in Hollywood, Kelly Rowland is now happily settling into life with her husband Tim Witherspoon and their 1-year-old son Titan Jewell.

In an interview with Yahoo! Celebrity, the 34-year-old recording artist and actress talked about her childbirth experience, sleep-training her son, and the SoulCycle class that led to a TV role.

Of the birth of Titan, she shared, “The delivery was the best!” The former “X Factor” judge said that after being in labor for 22 hours, the baby was out in four pushes.

“I was in labor and the final stretch, it was like, ‘OK, here comes Titan!’ and he had a head full of hair,” she said.

She credited her husband for sleep-training their son. She said that he warned her that she wouldn’t like to hear the baby crying and urged her to take a business trip. When she got back, Titan was sleep-trained.

The actress wed Witherspoon in Costa Rica in May 2014. The couple welcomed their baby boy in November of the same year. Of 2014, Rowland said: “[It] was such a great year for us. It was almost like when my life began. So 2014 will always be like, ‘Ahhhh.’ It’s my favorite. Absolutely.”

Rowland also talked about how a friendly chat during her indoor cycling class led to her recurring guest role as the mother of Lucious Lyon (played by Terrence Howard) in the TV show “Empire.”

“I went to SoulCycle and [the show’s creator] Lee [Daniels] was there,” she said. “We were taking the same class with Angela Davis and we walked out talking about Empire.”

According to Rowland, she didn’t expect anything to result from the chance meeting, thinking that it was all just Hollywood talk. But that same day, people from the show started calling and asking her to come to Chicago.

Of her “Empire” gig and its serendipitous booking, she said, “This was just a coinkydink. You gotta watch it!”