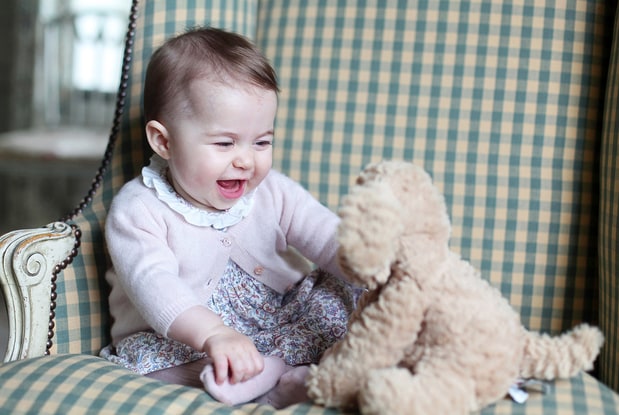 Brand new images of Princess Charlotte were recently released and the world immediately fell again for the 6-month-old royal.

Snapped by none other than her mom, the Duchess of Cambridge, in their official residence in Norfolk, the two pictures showed the happy brunette princess sitting in a gingham printed single sofa. In the first photo, the chubby cheek princess is seen gazing off camera while the other is a playful moment with her stuffed puppy toy.

According to reports the Duchess used her professional camera, her Canon EOS 5D Mark II to capture the snaps of her daughter, displaying her photography abilities and skillfully blurring out the backdrop.

On top of being mom of two and an aspiring photographer, Duchess Kate also has to juggle her time with her official appearances which also requires a lot of time and preparation. In light of that, the 33-year-old future Queen Consort has reportedly asked Pandora Delevingne for fashion tips. If Pandora’s last name rings a bell, it is because she is the mom of British supermodel and actress Cara Delevingne and socialite Poppy Delevingne.

A reliable source of Grazia magazine revealed the snippet via an article and the source was quoted as saying “Pandora advised Kate on both the Jenny Packham and the Erdem dresses she wore. She adored the Jenny Packham dress, but needed a bit more convincing on the Erdem one as the shape was very unusual, but Pandora encouraged her to go with it. Kate really wants to try more daring choices, so naturally turned to Pandora. They’ve known each other for years and Kate trusts her advice The Delevingnes have impeccable royal connections. Pandora is happy to advise the duchess, she enjoys it and regards it as an honor.”