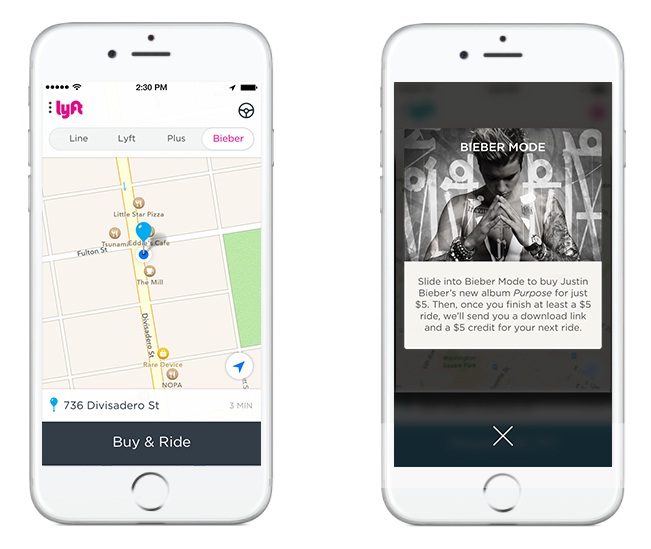 Music sensation Justin Bieber is set to launch his new album “Purpose” on Friday, Nov. 13, at an event to be held at the Staples Center in Los Angeles, California. In line with the release, the 21-year-old singer, in collaboration with ride sharing company Lyft, is offering the album for only $5 for a limited time.

“Slide into Bieber Mode to buy Justin Bieber’s new album ‘Purpose’ for just $5. Then, once you finish at least a $5 ride, we’ll send you a download link and a $5 credit for your next ride.”

Moreover, Bieber, according to the Lyft blog, will be riding around in a Lyft vehicle during the week of promotion, so passengers just might find themselves sharing a ride with the singing superstar. However, fans need to hurry as the offer is good only “while supplies last.”

Bieber and Lyft also released a video on YouTube to show fans what the ride could be like.

According to a press release for the promo, “What Do You Mean,” the first single from “Purpose” released in August, was hailed as the singer’s first No. 1 single on the Billboard Hot 100 chart. It hit the top spot in numerous countries, including the U.K. and Canada. It has been certified double platinum in several countries like Australia, New Zealand,and Norway, and platinum in countries like Italy. In the U.S., it reached platinum status in September, as certified by the Recording Industry Association of America.

“Sorry,” the second song from the album to be released, has been in circulation only since Oct. 22 and already, at the time of writing, it has garnered more than 100 million views on Bieber’s Vevo account on YouTube.